In an interview with GoldSeek on April 14, outspoken economist Peter Schiff issued a dire warning to investors. 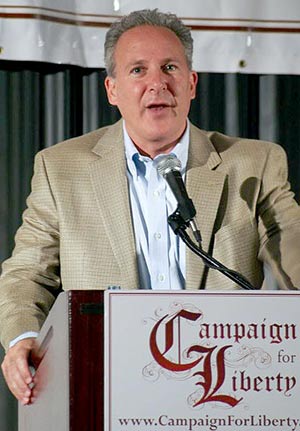 Peter Schiff at Campaign for Liberty, 2009

According to Schiff, a new housing bubble, an overvalued stock market, and President Trump's proposed stimulus plan will send the U.S. into extreme panic at some point in the near future.

In fact, Schiff thinks these catalysts will combine to cause an "inflationary maelstrom" that will "wipe out entire generations of retirees" who have their nest eggs invested in the market.

This new housing bubble - coined an "echo bubble" by some economists - is something we've warned you about before.

In the United States, there are at least six major cities - ones that recovered from the recession too fast - that meet the criterion for bubble status: Their housing markets are considered overvalued (above 0.5%), and their housing prices have skyrocketed well above 15% within the last five years...

What Is an Echo Bubble?

A post-bubble rally that becomes another, smaller bubble. For example, after the technology bubble that occurred at the turn of the 21st century – one of the biggest bubbles of all time – people believed that another echo bubble was on the way.

However, "[t]his bubble is different because it's an institutional bubble," said Schiff. "You have record ownership of single-family homes by hedge funds and private-equity funds. They bought these things up in '09 or '10 or '11, and their plan was to rent them out for a while and then sell them to other tenants."

"The tenants are now broke," said Schiff. "They're unemployed -- they have credit card debt, auto debt -- they can barely afford to even rent the houses!"

However, this housing bubble alone won't crash the economy, according to Schiff.

He believes what could cause chaos is the fact that this subprime housing debt is also concentrated in delinquent auto and student loans, putting over $4 trillion at risk.

The Stock Market Is a Joke

"The U.S. stock market rally is ending," said Schiff. "It's a bubble that is going to deflate."

Since the November election, the Dow Jones Industrial Average has surged over 12%. Additionally, the S&P 500 has added over 9%, and the Nasdaq has soared 13%.

But Schiff thinks the markets are extremely overinflated due to "investor optimism."

[Editor's Note: We diverge from Schiff on the stock market rally coming to an end. In fact, our experts predict the Dow Jones has every chance to propel to 30,000 and beyond in the near future. Watch Capital Wave Strategist Shah Gilani on FOX Business' "Varney & Co." on Feb. 22 as he made his own surprising case for the stock market. ]

However, according to Schiff, the real impetus that will topple this economy has already begun...

Compound interest of the debt during high market interest rates or red ink of the banks balance sheet due to derivatives or popping of the banks real estate assets values will bring into question solvency of the banks and government. Credit crunch ensues. Either asset devaluation by 70 percent or nominal asset devaluation. Demise is certain. I anticipate a free for all.

One more reason to put a stop on every trade. Know your exits before you enter ant trade.