And all it would take to make such a success a reality would be Trump meeting Kim Jong Un - Pyongyang's young, militarily aggressive dictator - in a diplomatic environment without any prerequisite demands. 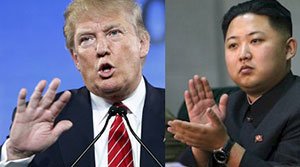 At least that's according to Yang Xiyu, a former Chinese diplomat with more than 10 years' experience in Korean Peninsula issues.

Yang told The New York Times today (Monday) that he detects an opening for such negotiations to take place right now...

"[President Donald] Trump said something interesting during his campaign," Yang told The New York Times, "that if necessary he could meet with Kim Jong Un and have a sandwich with him."

Yang was referring to a statement the president had made on May 18, 2016, during his presidential campaign. That's when Trump claimed that he'd be willing to talk to Kim Jong Un over a sandwich meal to discuss stopping North Korea's nuclear ambitions.

Referring back to Trump's year-old statement, Yang added, "We can see that as a shortcut to solve the issue in a peaceful manner."

Such a face-to-face would be a vastly different approach to North Korea's threat than the one former President Barack Obama's admin took.

You see, in 2014, at China's behest, Obama actually agreed to U.S.-North Korea negotiations...

But only on the condition that Pyongyang give up its nuclear arsenal first.

Stipulations to a meeting like that are the primary obstacle to making diplomatic discussions between the U.S. and North Korea a reality.

"Now is the time to remove that obstacle and go to Mr. Kim directly," Yang told the Times.

Whether Trump's admin would really be willing to remove this impediment and simply "meet over a sandwich" is anyone's guess.

A month ago, during a visit to South Korea (on March 19), Secretary of State Rex Tillerson rejected another push from China for talks as a way of buying time to halt North Korea's testing program.

Once again, Tillerson claimed that negotiations could begin only after the North gave up its weapons.

However, just this morning, Vice President Mike Pence hinted that the Trump's admin might be willing to engage in diplomatic talks with Pyongyang.

"No one should mistake the resolve of the United States," the VP said, according to MSNBC this morning, but noted that Washington was seeking security against North Korea "through peaceable means, through negotiations."

And to that point, Yang said, "There is only one person who has the authority to make a fundamental decision [about rolling back North Korea's weapons programs] - yes or no - and that's Kim."

"China can facilitate a three-way dialogue among the top leaders of China, North Korea, and the United States so we can at least try the shortcut," he added.

And Patalon has made prescient calls on three stocks that have been consistent performers but that should soar once reality "catches up" with American policymakers.

Patalon is expecting that any day now...

Good ideas, if they would work, but I have my doubts!