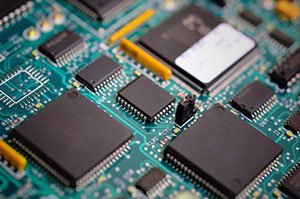 A June rate hike has become less likely. Currently, the World Interest Rate Probability data set a 47% chance that the Fed will raise rates in June. Last week, the probability for a June rate hike was 66.5%.

The likely cause for the reduced probability of a rate hike is the weak economic data that was released on Friday. Retail sales fell in March by 0.2% compared to a year ago. This is the second straight month retail sales have fallen.

Advanced Micro Devices stock is up 1.1% in early morning trading after Thursday's 3.5% drop.

The semiconductor company is up over 355% in the past year. The gain is due to investments in autonomous vehicles.

However, AMD stock has dropped over 15% so far in April amid concerns over future growth. The concerns stem from market saturation and shrinking margins in the industry overall.

AbbVie stock is up 1.8% in early morning trading due to the company filing a lawsuit against Amgen Inc. (Nasdaq: AMGN).

AbbVie brought the suit against Amgen saying its Amjevita infringes on patents for AbbVie's Humira. The suit claims that Amjevita is biosimilar to Humira, meaning that the biologic is close enough to the existing medication that there isn't a meaningful difference between the two drugs.

Humira is one of AbbVie's top-selling drugs, accounting for 63% of its revenue. If the suit is denied, the company may begin to lose market share and revenue. If it is determined that Amjevita is too similar to Humira, AbbVie may be able to maintain its market share in autoimmune disease treatments.

Moneygram stock is up 8% in early morning trading after Ant Financial increased its bid for the company.

The previous bid was $13.25 a share but was increased after Euronet Worldwide made a bid of $15.20 for Moneygram.

The new Ant Financial bid is $18 a share and values Moneygram at $1.2 billion.

Turn a Small Stake into a Fortune: Marijuana investing is in its "frontier" stage right now, when the earliest investors can make the biggest windfalls. Marijuana stocks are seeing triple-digit gains of 224%... 378%... even an exceptional 751%. We've made it easy for you to learn how to get started yourself with a unique "pot investment" plan. Click here to learn more...