On April 28, the current funding agreement for the federal government expires. Right now, there is no agreement working through Congress to replace the current one.

That leaves many investors asking, "Will the government shut down?" 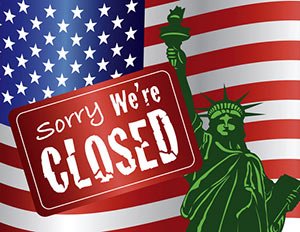 Here's everything investors need to know about a looming government shutdown, including a way to book market-beating gains when other investors are panicking...

Why Will the Government Shut Down Without a Spending Bill?

A government shutdown occurs when there is a "funding gap." That refers to when Congress has not passed either a budget or a spending bill to allow the funding of government agencies and operations.

Urgent: A completely unique gold play is forming in the markets. And it's so rare that it's only the third time in 20 years that it's happened. Read more.

This is due to a law passed in 1921 that mandates the government must have a budget or spending bill in place in order for government activities to be funded. That means once the current bill expires, there are no funding allocations for the government.

To make matters worse, the deeply divided Congress is currently on recess until Friday (April 21). So there will only be one week to come to an agreement in order to prevent the government from shutting down.

Hot topics being debated by Congress include Obamacare payments, sanctuary cities, the border wall (and border security as a whole), and defense spending. All of these talks not only have to overcome the division along party lines, but also the in-fighting of the Republican Party.

Moderates in both parties are not likely to vote to suspend Obamacare payments or fund the border wall. If these controversial measures are included in the bill, it is unlikely the spending bill will be passed before the April 28 deadline.

The media is not giving this potential shutdown on April 28 the attention it deserves, meaning the markets are not fully prepared. And the April 28 shutdown may not be the only government shutdown we see this year...

In order to prevent a second government shutdown in 2017, Congress must pass a budget for the next fiscal year. The government's fiscal year begins Oct. 1. That means Congress has only one month to finish negotiations about the budget when they return from the three-month summer recess.

If history is any indication, the markets will take a hit this year.

The last three shutdowns over spending resulted in dips in the market. 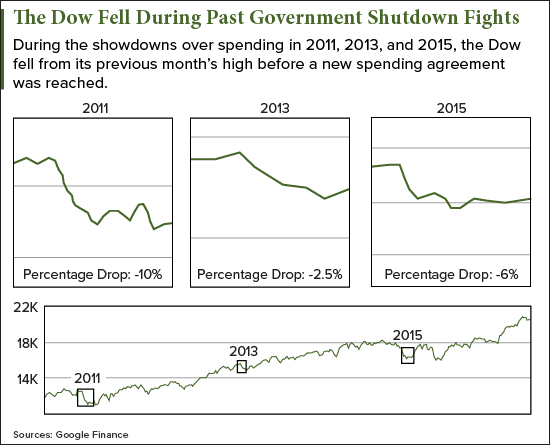 The markets don't like surprises, and right now they don't see either of the government shutdowns coming. That is bad news for investors.

But for our readers, a government shutdown could result in the biggest moneymaking opportunity of the year...

The Biggest Profit Opportunity During a Government Shutdown