Despite no IPO announcement yet, the SpaceX market valuation should be enormous. In fact, SpaceX is already the ninth most valuable private company in the world. 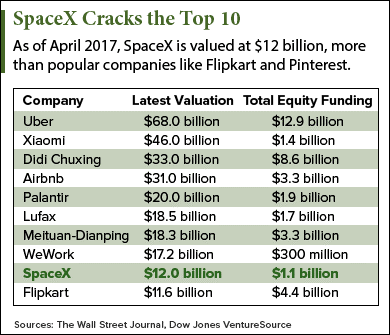 As this chart shows, SpaceX already boasts a private valuation of $12 billion. The company has been climbing the rankings, too. It's up from the 10th position in March and 11th position in February.

SpaceX's private valuation is a big indicator of what its valuation will be after it goes public. In general, a firm's private valuation dictates how much demand there is for the stock once the IPO prices on a stock exchange. The stock price – combined with the total number of shares – determines the firm's market cap, which equals the total value of the public company.

But that's only a fundamental indicator. Today, we're going to show you two bigger factors that will influence the SpaceX market valuation once the firm goes public down the road.

The first factor that will determine SpaceX's valuation to investors is the firm's projected revenue.

You see, most of SpaceX's revenue right now comes from big contracts with agencies that need its rockets. For example, NASA paid $2.6 billion in 2014 for SpaceX to launch payloads to the International Space Station (ISS) orbiting the Earth. These payloads – which are basically supply shipments – are delivered to the ISS via Falcon 9 rockets and often include probing devices, satellites, and other tools.

Free Report: The Best Stocks to Buy for Stunning Profits in 2017

As of February, SpaceX has a backlog of 70 supply missions worth a combined $10 billion, according to Fortune. To meet this demand, the company announced on Feb. 6 that it would begin launching a Falcon 9 once roughly every two or three weeks. That's the fastest rate of launches ever for the Falcon 9 model.

While Fortune reports that the 70 backlogged orders are worth $10 billion, SpaceX's official website says it costs customers like NASA roughly $62 million per Falcon 9 launch. If you multiply that cost by those 70 orders, SpaceX could potentially be looking at future revenue of roughly $4.3 billion. That crushes competitor Blue Origin's estimated annual revenue, which business crowdsourcing site Owler estimates is around $69 million.

Those massive revenue projections will certainly have investors clamoring for SpaceX stock once the firm files to go public. The high demand for shares will result in a huge SpaceX market valuation.

But the second factor determining the company's value is even more significant. It deals with SpaceX's deeply rooted goal to colonize Mars, which means this factor could make or break the firm's long-term profitability.