Access Your Profit Alerts
Sign Up for Money Morning and get your free report:
"The Best Stocks to Buy Now"
How to Buy Bitcoin
Twitter
Stocks: IVN
View Comments

Platinum prices in 2017 have been outperforming the broader market, making the precious metal a worthy investment.

What's more, Money Morning Resource Specialist Peter Krauth predicts the platinum price will continue to soar in 2017. His forecast is for another 31.6% increase to $1,300 an ounce by the end of the year.

2 Bullish Catalysts for Platinum Prices in 2017 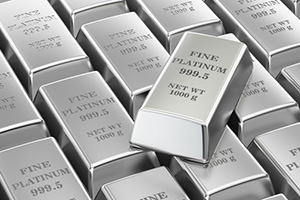 The first reason the price of platinum will rally this year is very simple: Platinum is extremely rare. In fact, platinum is much rarer than gold, silver, and copper.

Similar to gold, silver, and copper, platinum is traded through long-term futures contracts on the New York Mercantile Exchange (NYMEX). But platinum futures are more expensive simply because less of it is mined from the ground. It's an extremely difficult metal to extract, which raises the operating costs of companies to the point where it can be unprofitable to mine.

Last year, only 168.9 metric tons of platinum were produced in the top five platinum mining nations. These include South Africa, Russia, Zimbabwe, Canada, and the United States, respectively. That output is nothing compared to the 3,100 metric tons of gold produced in 2016.

This short supply will be outpaced by rising demand. According to the World Platinum Investment Council (WPIC), demand caused a fifth consecutive year of a platinum supply deficit in 2016, and 2017 is expected to be the sixth. In fact, the platinum deficit could be as much as 120,000 ounces by the end of the year. These supply-and-demand fundamentals point to much higher platinum prices this year.

The second reason we're bullish on platinum is its growing use as a safe-haven investment.

Just like gold and silver, platinum can serve as a hedge for investors during times of volatility or uncertainty in the market. Recently, the stock market has become volatile due to escalating conflicts overseas.

On April 7, the United States launched missile strikes on a Syrian airfield in response to Syrian President Assad's role in a chemical weapons attack that killed more than 70 people. The United States has also grown more hostile toward North Korea, which has conducted several missile tests off the coast of the Korean Peninsula.

These strained relations have dragged the Dow Jones down 1.7% in the last month. Meanwhile, the price of platinum has gained 2.6% over the same period.

Even without the world crises, investors have been increasingly moving more and more of their money into precious metals for fear that a market crash is on the horizon. Investments in gold, silver, and platinum have surged since the beginning of 2017 and are expected to continue while we have these market uncertainties.

As long as investors continue to use precious metals as a safe haven, platinum prices will continue heading towards the $1,300 price target. And today's platinum stock recommendation could rise as much as 49.8% by next April thanks to the platinum price rally.

Here's one of the best platinum stocks to buy in 2017…

Platinum is not a safe haven metal ONLY industrial,,,like the other PGMs rhodium,palladium,irridium,ruthium,,,,etc …Gold/silver is safe haven and the only you can sell fast and easy. Especially in a fiat collapse. Gold/silver is worldwide,,,platinum not( only south africa ). Even the inka indians found platinum worthless. VERY difficult to sell physical platinum.