There has been a lot of action happening lately in the U.S. dollar and other currencies. Why should investors care? The main reason is that currencies indirectly affect your stocks. 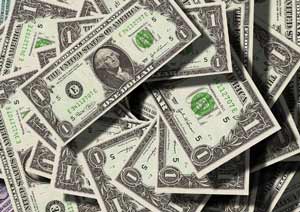 And right now, the dollar's easing lower since December might be one of the reasons why the "Trump rally" has not suffered a significant correction.

When the dollar is strong, it can hit the bottom line of the companies you're invested in. For example, domestic companies that do a large portion of their sales overseas want to send their profits back home. To do that, they must convert them into U.S. dollars. If the dollar is very strong, it takes more euros or yen to equal one dollar, and that means fewer dollars going back to the United States.

In contrast, a weaker dollar means profits overseas are worth more here. A weaker dollar is good for domestic exporting companies.

Taking that one step farther, most of the largest companies on the New York Stock Exchange do sell overseas, so a weaker dollar actually gives the Standard & Poor's 500 a boost.

Free Report: The Best Stocks to Buy for Massive Returns in 2017

Because President Trump has dedicated his efforts to improving the economy, it is not a surprise that on April 12, he tweeted that the dollar was too strong. Whether economists agreed is not the point. If the president believes a lower dollar will help the economy, then the market believes that he will push policies that attempt to weaken it.

Can he do that? Well, in a manner of speaking.

What Trump Can Do to the U.S. Dollar

You see, when it comes to markets and global politics, perception is reality. The stock market rallied after the election on the hope that the new administration would cut taxes and reduce regulation. The misfire on a new healthcare law and subsequent delay of tax reform changed the stock market's mood for the worse, although it was not a major blow to the bulls.

And that is why the possibility of an engineered decline in the dollar by the administration matters.

The dollar, as represented by the U.S Dollar Index, peaked on Jan. 3 and has been in a mild decline ever since.

This index represents a basket of other currencies, including the euro, Japanese yen, British pound, and Canadian dollar. It is weighted by the amount of trade each country, or region in the case of the euro, does with the United States. Due to its vast size, the euro represents a bit more than half of the movement of the dollar index.

The euro is up about 2% versus the dollar since bottoming in December. This is the main reason that the dollar's value is down by nearly the same percentage since it peaked in December.

So, if the markets believe the dollar will fall and it has only moved 2% lower, it must mean that other countries have enough problems of their own to keep their currencies weak. The exception is Japan, where the yen is up 9% since December.

The argument that the president, even through perception, can alter the dollar's trend is not a strong one. After all, the value of all currencies traded tops $5 trillion each and every day.

To put that in perspective, in only four days, the value of currency trading around the world would equal the U.S.' debt of nearly $20 trillion. The market value of all stocks trading on the New York Stock Exchange last year was just over $19 trillion.

As you can see, the currency markets are so big that it would be hard to believe, short of accomplishing major legislation or realized acts of war, that the president or a president's tweet can move the dollar for more than a few days.

Indeed, the trend in the greenback has been up since 2011. The 2017 swoon is quite small compared to the huge gains made since that time. And even in the short term, the one-year rising trend is still intact.

Investors can expect dollar bulls to get active within weeks as the market dips to meet that one-year line.

There is a possible wild card, though: the election in France later this month.

While currently third in the polls, there is one candidate who is very much interested in leading France out from the European Union (EU). If she wins and France does leave, then the euro could plunge. That would send the U.S. dollar soaring.

The Bottom Line: Overall, the dollar's current weakness seems to be in response to growing tensions around the globe from Syria to North Korea and even Brexit. However, the long-term trend remains to the upside, and that means investors should ignore the presidential tweet and continue to invest in good companies.

Donald Trump's $18.7 Million "Secret Investment": President Trump is just one of many billionaires taking advantage of a Great Depression-era "program" to build massive fortunes. A small group of regular Americans have begun to use them as well. And they're making millions. Could you be next? Read more...