Investing in clean energy might sound like it's simply meant to help the environment, but it's actually an extremely lucrative opportunity for savvy investors.

That means right now is the perfect opportunity to invest in clean energy to realize the potential profit windfall. 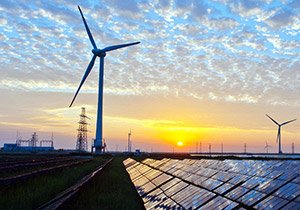 And we're going to show you exactly how to invest in renewable energy, including our top clean energy stock, ETF, and access to our report on profiting from the $48 trillion solar industry...

Why Investing in Clean Energy Is so Profitable

The demand for energy is only going to grow, and that makes energy one of the best sectors to invest in.

In fact, the EIA forecasts global demand for energy will rise 25% by 2040 as the global economy continues to develop. That by itself presents a major opportunity for alternative energy investors. More demand means there's more room for the renewable energy market to grow.

But there's more to the story...

Oil and gas will become more and more expensive as these limited resources become scarcer.

The International Energy Agency forecasts that oil and gas companies will be forced to move into "smaller, more remote or more challenging reservoirs" as existing sources dry up. This means not only will production costs soar, but the scarcity of the resources will push prices higher, too.

That could be a nightmare scenario for the rest of the world's economy, as nearly every sector is reliant on energy.

But that nightmare won't become reality thanks to clean energy.

Last year, Bloomberg reported the costs of solar energy are now 1/150th of their 1970s prices. And more recently, a United Nations study showed renewable energy prices are down 10% in the last year.

Those falling costs mean more renewable energy is being used. That's why 55% of new power comes from alternative energy sources.

But the growth of clean energy will be even more dramatic once oil and gas prices soar.

The EIA expects electrical power generated by renewable energy to skyrocket if gas and oil prices rise. And the EIA forecasts renewable energy will produce more electric power than coal in the next few years, too.

Check out the potential for renewable energy from the EIA's forecast in our chart below. You can see we are in the very early stages of the alternative energy boom. Electrical power from alternative energy could nearly quadruple between now and 2040. 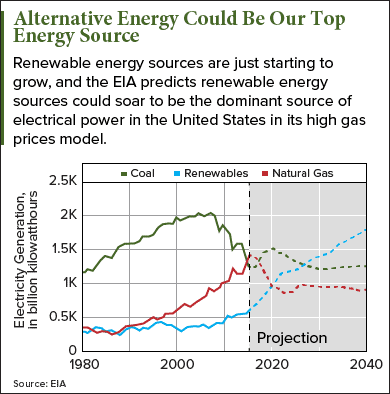 But to capitalize on this clean energy revolution, investors need to get in early before it really takes off, or they'll risk losing out on the most lucrative gains.

And that's exactly why we're going to show you how to invest in renewable energy. To help you profit from this energy revolution, we're giving you our best clean energy investment plays, starting with our top clean energy ETF.

And after the ETF, we'll show you our favorite clean energy stock to buy now, and we'll also show you how to access our full report on profiting from the $48 trillion solar industry.