Billionaire activist Mark Cuban has a new political theory: He believes a subversive "Democratic invasion" is currently underway at the White House. 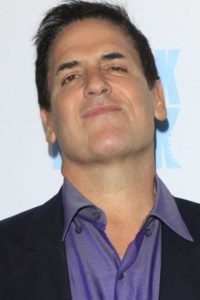 Gasparino relayed the info to his FOX Business colleagues and viewers yesterday afternoon.

He said that Cuban believes Gary Cohn, director of the U.S. National Economic Council who was appointed by President Donald Trump, is specifically leading this "Democratic invasion" on Capitol Hill…

Cuban said Tuesday that Cohn's influence on the new president would explain why Trump has become more centrist – especially with his tax policy plans, according to Gasparino.

"There's a thought out there, not just from conservatives, but from some liberals, that [President Trump] went for [tax reform changes] first instead of tax cuts because there's a Democratic takeover of the Trump administration," Gasparino added.

"Fifty-percent of non-military leadership [in Trump's administration] are Democrats," Cuban told Gasparino – including the likes of Cohn and Treasury Secretary Steven Mnuchin, as well as the president's senior advisor (and son-in-law) Jared Kushner, and assistant to the president (and daughter) Ivanka Trump.

To Cuban's point, it was Mnuchin who admitted on Monday that the GOP's plan to have a tax reform bill submitted to Congress by August is "highly aggressive to not realistic at this point," The Financial Times reported.

And Cohn hinted this same sentiment to Bloomberg on April 7. He claimed that he, too, has doubts about that August deadline.

If Cuban's right, it'll be much harder than Trump supporters anticipated for the new administration to make changes in Washington…

Not only would the Trump admin face a "Democrat invasion" from within, it faces renewed Democrat opposition in Congress.

You see, Democrats are pushing the president to release his tax returns… again.

This time, if he refuses, they've threatened to hold up tax reform policy changes indefinitely.

"If he doesn't release his returns, it is going to make it much more difficult to get tax reform done," Sen. Chuck Schumer, the Senate's leading Democrat, threatened on Monday, according to The New York Times.

Schumer pointed out that the president has significant conflicts of interest on issues such as taxation of the real estate industry and elimination of the estate tax. "It's in his own self-interest," Schumer added.

Whether the president will release his taxes following this latest threat is anyone's guess, but  there's one analyst who believes that if Congress would just start with one tax reform issue rather than a bunch at once, then tax policy change could start to happen as soon as today…

They just need to start with simple corporate tax cuts.

Because corporate tax reform is not only "music to the stock market's ears," Fitz-Gerald claims, but it's doable, will win favor across both political parties, and create jobs.

Plus, it's possible to enact right now. Have a look…

You Know What Happens Next… Some of the biggest investors in the world are quietly moving money into a fast-growing sector. Warren Buffett is in for $15 billion and has another $15 billion waiting for the right moment. Bill Gates is fully on board with billions on the line. When that kind of money moves in early, you know there are fortunes to be made. See where the big money is headed right here…

This is an effect I've been observing too. Trump is NOT a typical Republican (not an indictment; just a fact). But I have had a bad feeling about Gary Cohn, since he is more of a swamp monster than anyone else within the White House. He was a top person within the Government Squid (GS–Goldman, Sachs). And I believe he is more entwined in the Wall Street–Washington Axis than even President Trump would like to see.