It makes sense to assume the highest-paid CEOs in America also are the best-performing CEOs.

But the numbers tell a different story.

This study found the opposite is true - the best-paid CEOs on average deliver the worst results for shareholders. 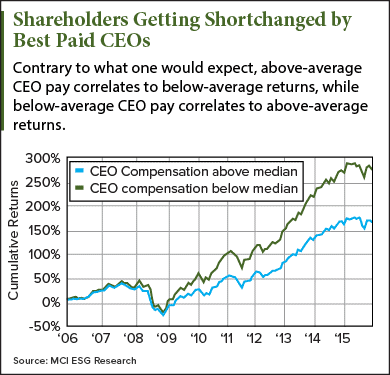 Note that CEOs don't just get compensated in salary and benefits like the rest of us. They also get huge bonuses, stock options, stock awards, perks, and other incentives.

While investors need to keep most of their focus on the company itself, it's apparent that high CEO pay can be a red flag.

Another useful tool is the ratio between the CEO's compensation and that of the company's median worker. And starting next year, investors will be getting a lot more information on that...

The disclosure of the ratio between CEO pay and worker pay is required under 2010's Dodd-Frank Act, but was delayed for years as companies complained about the difficulties of compliance.

In just a little over nine hours, the average CEO earns more than the average worker does over an entire year.

But in 2015, the U.S. Securities and Exchange Commission voted to put the rule into effect as of the first quarter of 2018 - less than a year away.

What we do know is that the gap between CEO pay and that of the average worker has grown to an embarrassing size - the AFL-CIO reported that the average American CEO made 335 times more money in 2015 than average production and non-supervisory workers did.

By comparison, U.S CEO compensation was just 30 times that of the average worker in 1978.

But those averages greatly understate the discrepancies in the pay ratios of the highest-paid CEOs (hence the need for the Dodd-Frank disclosure rule).

Khosrowshahi at least delivered 47% in total shareholder returns in 2015.

But no one else in the 25 highest-paid CEOs of that year came close to that performance.

Here's a chart showing how much each of the highest-paid CEOs made in 2015, how well the company's stock fared, and the total shareholder return.

Few of the Highest-Paid CEOs Earn Their Keep

Your opinions are much valued