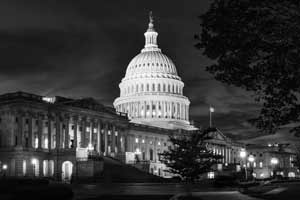 Why Will the Government Shut Down?

Congress needs to pass a new resolution to fund the government before April 28. But there are serious doubts about their ability to agree on a proposal, especially since Congress is in recess until April 21.

Republicans control both chambers of Congress and the White House. But there are enough divisions within the party that could derail a funding bill without Democratic help. Just last month, a Republican effort to pass their own healthcare bill failed without ever reaching a vote in the House.

In that instance, Democrats refused to support the bill while Republicans couldn't agree on what should be in it. Once Paul Ryan realized he didn't have enough votes to pass it, he scrapped the measure.

The new funding bill could be doomed to the same fate as the failed healthcare bill.

The current spending bill funding the government was passed in December. An agreement was easier then because President Obama could still veto extreme bills and Republicans knew they would have complete control this April.

That optimism is misplaced.

Now that Republicans control the government, they could be tempted to use the opportunity to take a stand on some controversial measures. And that could create enough divisions that a funding bill is derailed, just like the healthcare bill.

In fact, New York Magazine reports that during the last budget battle in 2016, Republicans voted for a spending bill that also repealed Obamacare and defunded Planned Parenthood. President Obama vetoed the bill.

But a government shutdown could send the stock market plunging.
CNN says President Trump has pushed to cut off funding for Obamacare subsidies to insurance companies, and Republicans were unable to cut off funding for Planned Parenthood after the healthcare bill collapsed. But a new spending bill could be the perfect vehicle for enacting their agenda.

Taking on these controversial measures would ensure Democratic opposition, and they could even divide the Republican Party between their Freedom Caucus and more moderate factions. If such divisions prevail, a spending bill won't pass.

Don't Miss: China Readies Itself for Global Trade War with U.S. and WTO

And the reason this is so important is because shutting down the government could have drastic consequences for the economy...

What Does a Government Shutdown 2017 Mean for My Money?

The short answer is the government won't be able to pay its bills until a spending bill is passed. That could mean missing Social Security payments or federal employee furloughs. And that would be damaging enough.

In 2011, the Dow fell 10% during a showdown over the debt ceiling between the middle of July and August. The government shutdown of 2013 sent the Dow falling 3% during the last week of September. A near government shutdown in 2015 saw Dow stocks falling 6% in just over two weeks in late August.

And a government shutdown in 2017 could cause an even bigger downturn.

You see, the Dow has surged 13% since Election Day, smashing through a series of all-time highs. It even ended March with 12 consecutive record-high closes. That's largely due to the belief a Trump administration would be good for the economy. President Trump has proposed an ambitious agenda of tax cuts, a trillion dollar infrastructures spending bill, and a spate of deregulation.

How to Profit from a Government Shutdown 2017