An economic gauge that's highly contentious among investors and economists is the Baltic Dry Index (BDI). Some view it as an outdated index, while others see it as a strong predictive indicator of global economic growth.

Still, many investors don't fully understand the Baltic Dry Index and its significance.

Today, we're going to show you everything you need to know about the BDI. Then, we'll show you a stock whose shares could skyrocket 133% by next April thanks to the index's growing strength.

Here's everything you need to know about the BDI…

What Is the Baltic Dry Index? 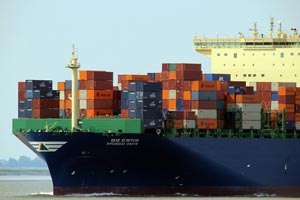 Started in 1985, the Baltic index is a trade and shipping index based in London. It generally tracks the price changes in transport fees for raw materials around the world.

What Does the Baltic Dry Index Measure?

In a nutshell, the BDI measures the global shipping industry. More specifically, it follows the prices of several globally traded bulk commodities by compositing their tonnage fees on popular sea routes into a single index.

The commodities tracked by the BDI include coal, wheat, cement, iron ore, grain, and other raw materials considered fundamental to society. The sea routes that are tracked include the Panama Canal (tracked by the Panamax cargo ships) and Cape Horn (tracked by the Capesize ships).

But on the simplest economic level, the Baltic Dry Index measures supply and demand on a worldwide scale. When the BDI falls, it reflects falling global commodities sales and shipping prices. Since shipping is the main indicator of whether or not countries want goods, lower shipping prices can signal a weakening economy. After all, countries buy more goods when their economies are stronger and they have more money.

Why Is the Baltic Dry Index Important?

The Baltic Dry Index is important because it gauges global trading activity, which itself is a huge indicator of economic health.

The BDI tracks the trading activity of only the most fundamental raw materials, such as coal and iron ore. These goods are significant because their global trade and prices have low speculation. Since these are only basic goods whose prices are often unaffected by geopolitical events, investors gain insight into core economic growth by watching the index's movement. If it moves higher, outlook on economic growth is positive. If it moves lower, the outlook is negative.

However, some investors don't consider the BDI a true indicator of economic health. This group of BDI detractors emerged in the wake of the 2008 financial crisis…

You see, the financial crisis led to a glut of cargo ships, as many around the world sat dormant. These ships filled with raw materials stayed at their ports because the exporting countries didn't trust the credit of the importing countries.

Even as the economy recovered, the index began to lose its appeal as an economic indicator. The biggest reason for this was China's surging cargo ship capacity, which was estimated to double from 2010 to 2013. That caused the global number of cargo ships to nearly double.

Because of this big supply injection of vessels, economists haven't been able to properly recalibrate the index. Since China never reported exactly how many ships it built from 2010 to 2013, the BDI might not be accounting for thousands of ships around the world.

Despite these drawbacks, some investors have renewed their interest in the Baltic index recently…

Over the last two years, the BDI has rebounded 107% to $1,243. This – along with Trump's proposed trade restrictions with China and other countries – has analysts more bullish on the shipping industry as a whole. On March 28, Morgan Stanley (NYSE: MS) analyst Fotis Giannakoulis said growing iron ore demand in China and strengthening rates on Capesize ships show the dry bulk market is becoming healthier.

Money Morning Resource Specialist Peter Krauth agrees that the BDI is still important, especially as shipping rates have surged more than 85% since February.

"When the BDI rises strongly, it suggests a tight market, where demand is robust while supply is limited," Krauth told Money Morning Members on April 12. "Lately, the BDI has been providing signals that the global economy is 'waking up.'"

And thanks to the strengthening BDI, Krauth has found one shipping stock that could vastly outperform the markets this year.

This company's stock price is very cheap right now, costing less than $8. And we expect it to skyrocket as much as 133% over the next year…