(Kitco News) – There is still keener risk appetite in the world marketplace Tuesday, as world stock markets were mostly higher on follow-through strength from the gains scored Monday. Reports said the VIX index, which measures stock market volatility, dropped by 26% on Monday, which is the largest one-day drop in six years. U.S. stock indexes are pointed toward higher openings when the New York day session begins.

Gold prices are lower on some follow-through selling pressure from Monday's losses.

Traders and investors have breathed a sigh of relief on news the first round of the French presidential elections on Sunday determined the centrist candidate Emmanuel Macron and nationalist candidate Marine LePen will square off in the run-off election on May 7. However, LePen fared worse than many expected Sunday and Macron is now projected by early polls to be the decisive winner of the May 7 vote.

Safe-haven assets gold, U.S. Treasuries and U.S. dollar index prices have all been hit hard early this week. The Euro currency has pushed solidly higher on the French election results.

The key outside markets on Tuesday morning see the U.S. dollar index trading near steady following Monday's losses. Nymex crude oil prices are slightly higher on a corrective bounce after hitting a three-month low on Monday. 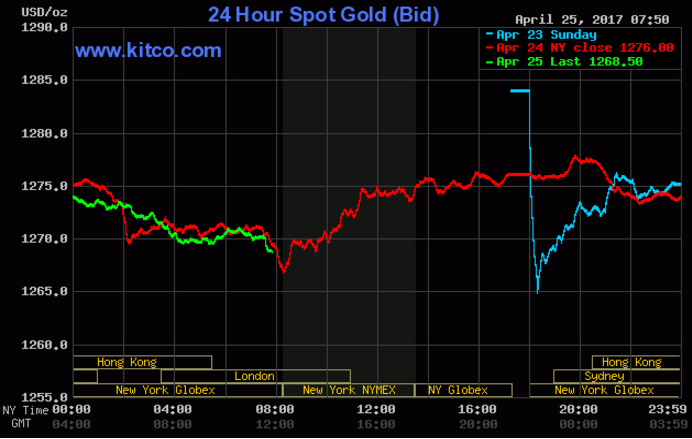