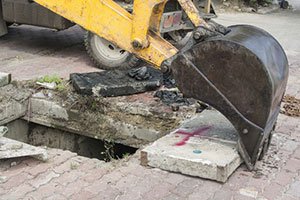 There has been a long-standing dispute between U.S. and Canadian loggers. The United States claims subsidies from Canada have created an unfair advantage. This has culminated in U.S. Commerce Secretary Wilbur Ross announcing a duty on all Canadian softwood lumber imports. The duty will average 20% and will offset the subsidy Canadian companies enjoy.

The duty is preliminary, but the process is underway to approve the measure ahead of NAFTA talks that are expected to begin sometime in May.

There are three U.S. economic reports being released today. They are the Case-Shiller home prices, new-home sales, and confidence. Home data has not been strong this month and it is unlikely this round will be better. If the housing data being released today is as weak as expected, the probability of a June rate hike will likely be reduced.

Caterpillar stock is up 6.7% in early morning trading after beating earnings expectations.

The construction and mining equipment manufacturer reported earnings per share (EPS) of $1.28, beating estimates of $0.63.

Revenue also beat expectations. Caterpillar reported revenue of $9.82 billion, up from $9.46 billion for the same quarter last year. Expectations for revenue were $9.26 billion.

The company also raised its revenue outlook to $41 billion for 2017 from $28 billion.

AdvancePierre stock is up 9.3% in early morning trading after Tyson Foods Inc. (NYSE: TSN) announced it will buy the company.

Tyson will buy the ready-to-eat food producer for $40.25 per share, or about $4.2 billion. The deal is a cash deal and is expected to close in the third quarter of the year.

Express Scripts stock is down 11.7% in early morning trading after announcing it will lose its largest client.

The mail-order pharmacy has been in a legal dispute with Anthem Inc. (NYSE: ANTM) over the prices of prescription drugs that began last year.

Despite being offered discounts to the tune of $1 billion a year, the company will not negotiate a new contract with Express Scrips. The current contract expires in 2019, meaning Express Scripts will lose 18% of its revenue.

Editor's Note: For only the third time in 20 years, a metal more rare and more exotic than gold is about to make stock market history. And it's poised to make early investors a lot of money. Get the full story.

SPXU is my choice this afternoon. Allow the excitement to calm down. The hype will only breathe for a moment before its left gasping for air. The possibility that poses a threat in affect.

I also agree. Keith and Shah painted it perfectly.