A lot more people have been asking "what is Ethereum?" following its massive 280% price increase over four weeks ending in mid-March.

The cryptocurrency jumped to $50 from just over $13, according to WorldCoinIndex.com, attracting attention beyond the folks who normally follow the ups and downs of digital currencies.

While the rapid Ethereum price rise was attributed at least partly to capital moving out of fellow cryptocurrency Bitcoin, the gains have stuck. After a brief pullback, the price of Ethereum has climbed back to $50 as of April 20. 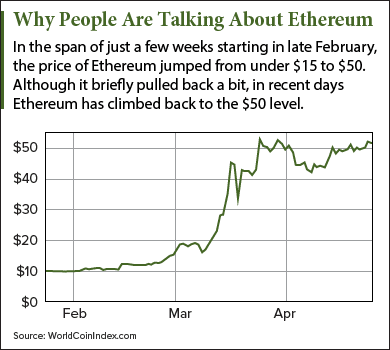 That's put the Ethereum market cap – the total value of all existing Ethereum – at $4.4 billion, making it the world's second-most valuable cryptocurrency. (Bitcoin is No. 1 with a market cap of nearly $20 billion.)

Ethereum has been the primary, but not only, beneficiary of growing investor interest in digital currencies. The value of all cryptocurrencies combined has shot up 30% over the past month to more than $29.5 billion.

"This is a sign of new money flowing into the space and a clear indicator that the new money is not staying in Bitcoin, but heading straight for alternatives such as Ethereum," Joe Lee, founder and CEO of Bitcoin derivatives platform Magnr, told CoinDesk.

To address this growing interest, Money Morning has put together the following guide to answer our readers' Ethereum questions…

Ethereum vs. Bitcoin – How Do They Compare?

Although it may seem puzzling to have a lot of different cryptocurrencies (CoinMarketCap.com tracks more than 800), each has distinct features.

Most use modifications of Bitcoin's code. Bitcoin is "open source," so anyone can copy it, modify it, and release it as a new cryptocurrency.

Ethereum's code, however, was built independently from  Bitcoin's, and differs in several significant ways.

The initial batch of 60 million coins (called "ether") were not mined but sold in a pre-sale. Since then, Ethereum has been mined in a similar way as Bitcoin, but at a faster rate. Blocks are created every 15 to 17 seconds with a reward of five ethers. Bitcoin creates one block every 10 minutes with a current reward of 12.5 bitcoins.

But the most important distinction between Ethereum and Bitcoin is that Ethereum is programmable in a way Bitcoin is not. In the computer world, this is called being "Turing complete." It means the Ethereum network can run programs on a global scale.

Ethereum is unusual among cryptocurrencies in that it's intended to function less as a currency and more as an enabler of programmable functions.

The idea is that developers would purchase "ethers" for the right to run their code on the Ethereum network. The cost discourages waste and inefficiency. The Ethereum developers even refer to ether as "fuel" rather than digital currency.

What's So Special About Ethereum?

Ethereum's programmable nature makes it an ideal platform for "decentralized applications," or "Dapps." These are applications written to run on the Ethereum network independently. Once operational, a Dapp is not controlled by any individual or central entity.

Must See: These "Second Salary" Plays Could Make You and Your Grandkids Rich

So in the case of a sports bet, both parties would entrust their money to the program. After the results were obtained from a trusted source (agreed upon in advance), the program would send the money to the winner automatically.

Hundreds of Ethereum Dapps are either live or under development. Some Ethereum Dapps that have gone live offer games, point-of-sale software, a prediction market, and an advertising platform.

Didn't I Hear That Ethereum Was Hacked?

The Ethereum code itself was not hacked, but a grand and bold experiment called the DAO (decentralized autonomous organization) was.

The DAO used Ethereum as a vehicle to create a crowdfund platform. Investors bought ether to fund the DAO and would use the network to vote on startups they deemed worthy of receiving money.

The sale of Ethereum tokens raised $150 million in 28 days. But a few weeks later, a hacker figured out how to use the DAO's code against it, siphoning off $50 million worth of ether into a subsidiary account.

The only thing slowing the hackers was a 28-day hold on withdrawing the funds. In that time, the Ethereum community voted to create a "hard fork" in the cryptocurrency's code that would negate the hack, but result in two versions of Ethereum. A hard fork involves a change to the code significant enough that those who don't upgrade to the new version get left behind, unable to conduct transactions with those who have upgraded.

The "old" pre-DAO Ethereum continues to trade as Ethereum Classic, though at a much lower price (currently about $4).

Does the DAO Hack Mean Ethereum Is Risky?

The DAO hack was not the result of a problem with Ethereum itself, but with the programming code that ran the DAO. That code was flawed and vulnerable to exploitation by a clever hacker. It means that in the future, developers using Ethereum as a platform need to be more careful.

But that DAO hack doesn't mean the Ethereum code is flawed.

We've seen this play out with Bitcoin as well. Individual Bitcoin exchanges have been hacked because of weak security. But the Bitcoin code has never been hacked.

Should I Buy Ethereum?