Chinese investments are critical to the U.S. economy…

Many investors don't realize a whopping "40% to 60% of the revenue from S&P 500 companies in fact comes from China, or China-related trade," Money Morning Chief Investment Strategist Keith Fitz-Gerald explained to FOX Business host Stuart Varney back on Dec. 5, 2016.

Indeed, numerous American companies take advantage of cost-cutting opportunities afforded to them by China, and in turn, China enjoys benefits of trade. And the numbers show it:

Take Nike Inc. (NYSE: NKE), for example. It takes advantage of processing trade by exporting the rubber, cotton, and polyester to companies like Zhejiang Qiaoer Tinting Garment Co. Ltd. in China for free. In return, Zhejiang assembles the raw materials into shoes, then ships the shoes back to Nike for retail in the United States.

The "swap" is mutually beneficial to the United States and to China; the Chinese companies do not have to pay for the raw materials, and U.S. companies benefit from cheap labor.

In order to make this type of trade even more lucrative, Chinese firms sometimes acquire the U.S. companies that they trade with in order to own all steps of the process. For instance, imagine if the Chinese manufacturer for Nike were to buy Nike as a whole; it would then own both the manufacturing and retail businesses.

For many U.S. companies, it's more than a hypothetical scenario…

Here are the states getting the most of that money… 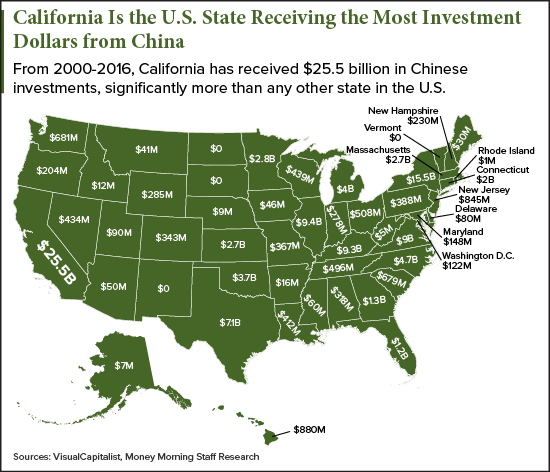 The industries in the United States that have received the most Chinese investments so far are real estate and hospitality ($29.5 billion), information technology ($14.2 billion), energy ($13.4 billion), and entertainment ($8.8 billion).

Another company Fitz-Gerald is watching is Starbucks Corp. (Nasdaq: SBUX).

The company is expanding its presence in China — it plans to have more than 5,000 stores opened by 2021 — a 1,150% increase from the 400 SBUX stores local to China in 2011. It also intends to install a 30,000-square-foot premium roaster on West Nanjing Road in Shanghai's shopping district.

Fitz-Gerald "likes the fact that the company is constantly improving Chinese operations and, in the process, making the most recently opened stores orders of magnitude more profitable than earlier iterations." All this meaning investors can tap into the Chinese consumer market with a well-known American company.

This article erroneously states:
"The "swap" is mutually beneficial to the United States and to China; the Chinese companies do not have to pay for the raw materials, and U.S. companies benefit from cheap labor."

These type of trades are not beneficial to the United States or to its people at large. So-called Free Trade is not Fair Trade. The proof being our humongous trade deficit. No entity can long operate on deficits.

Americans lose essential jobs necessary to individually match the variety of any given nations pool of labor skills. Only the American corporations and their savvy investors profit and that off the backs of Americans; i.e. their lost wages become an additional corporate profit.

To more rightly convey the truth of another quote in this article I leave you with the blanks filled in…
"Indeed, numerous American companies take advantage of cost-cutting opportunities afforded to them by China [at the expense of America and its people], and in turn, China enjoys [nothing but] benefits [from this kind] of trade. And the numbers show it:"