In July, Greece faces an enormous payment of €8.26 billion ($8.74 billion) on its staggering $356 billion debt. To put that debt figure into perspective, it's equal to 179% of Greece's GDP. The payments will be made over seven installments from July 7 to July 20 to four different lenders. 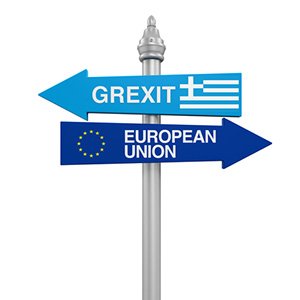 However, the country has already said it can't make its July payments without bailout funds being released. And now, bailout talks have stalled. This is causing investors to question whether Greece bailout funds will be released in time to avoid a default.

A Greece default could cause the euro to drop and world markets to panic. Especially when combined with Brexit, which was started on March 29, and elections in France and Britain. While many around the world are panicking, we have a way for investors to profit from the volatility.

And that volatility is only expected to increase, because this one sticking point will cause Greece to default...

Greece Bailout Funds Hinge on This One Key Issue

In the past seven years, Greece has already received three bailouts. The bailout funds being discussed, if approved, will be an installment of the 2015 (third) bailout. Right now, there is disagreement among Greece lenders about how to approach the debt.

An incredibly rare gold anomaly is shaping up in the markets as we speak: one that has occurred ONLY twice in the past 20 years. And it's about to happen again. Details here...

The largest holder of Greece's debt within the EU is Germany. Germany wants to see further austerity measures that will allow Greece to meet its debt obligations.

The IMF, on the other hand, advocates lessening austerity measures so that the Greek economy can improve. It also wants to reduce the debt and lengthen the debt service dates. The IMF sees that as the best solution going forward to solidify Greece's finances.

In early April, it looked as if the EU and the IMF, along with Greece, were moving closer to an agreement. They reached agreements on key items such as reducing pensions, liberating the energy sector, and increasing taxes. However, they have still not reached a genuine agreement, and the one glaring omission that the IMF needs to join the bailout agreement is making Greek debt more manageable by extending due dates and reducing the debt.

Without an agreement that makes Greece's debt more manageable, the IMF will not sign on to additional bailout funds. Without the IMF, it is unlikely Greece will get the bailout it desperately needs.

And the longer talks go on, the more uncertain a bailout becomes. Previously, the parties were hoping to have an agreement by April 7. Now, they hope to reach a deal by May 22, when the Eurozone finance ministers meet.

Unless Germany is willing to extend due dates and forgive some of Greece's debt, it is all but certain the country will default in July. This uncertainty is going to cause the euro to fall compared to the U.S. dollar.

Last time Greece defaulted on a loan payment was June 30, 2015, and the lender was the IMF. The result was the euro dropping 2% in just two weeks.

The level of debt payments makes the European Central Bank more likely to be defaulted on than the IMF this time around. That would cause Greece to be kicked out of the euro, causing much more uncertainty in the markets than the default on the IMF.

All of the uncertainty around Greece, and the EU as a whole, is going to cause the euro to drop significantly. That drop will bring with it an opportunity to make 134% in a single trade while the world markets panic...