President Donald Trump's tall promises about the new GOP healthcare bill expected this week ring hollow when you look at what the bill does.

He told "Face the Nation" yesterday (Sunday) that the newest amendment to the controversial legislation shows the plan has "evolved," before adding that it will cover pre-existing conditions "beautifully."

But there's one yuge problem with Trump's "beautiful" and "evolved" new healthcare bill... 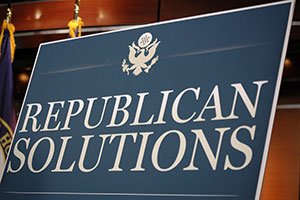 It's true that the latest amendment to the Republican healthcare bill would preserve the federal rule requiring insurers to cover pre-existing conditions.

But what the change doesn't preserve is the federal rule banning insurers from charging higher premiums to a core group of chronically sick individuals -- those who have experienced a lapse in coverage.

Nearly one-third of Americans with pre-existing conditions have experienced a gap in coverage over a two-year period due to job changes, other life transitions, or periods of financial difficulty, according to an April 27 report from the Center on Budget and Policy Priorities (CBPP).

Under Obamacare's "community rating protections," these individuals were protected from exposure to exorbitant healthcare premiums upon enrollment.

This was because their health assessments were based on a "pool" of other enrollees in their communities and not on their personal medical histories alone. This "community pool" assessment rule kept insurers from hiking up coverage premiums based on pre-existing health conditions like diabetes, a history of cancer, depression, etc.

But under the newly adopted Republican healthcare bill amendment, state governments could apply for waivers to community ratings protections. And if these waivers are passed, insurance providers would again be allowed to treat new enrollees differently based on their medical histories. But they'd do it by charging much higher premiums.

And there would be no limit on how high the insurers could go.

For example, the CBPP's April 27 report explained that this amendment to the healthcare bill could mean "premiums exceeding $100,000 per year for people with metastatic cancer, premiums in the tens of thousands per year for people who are pregnant or need treatment for substance use disorders, and large premium increases for people with common pre-existing conditions like asthma, depression, or diabetes."

But Republicans claim to have a solution to these steep premium costs...

Vice President Mike Pence explained to "Meet the Press" on Sunday how states could change coverage for those with pre-existing conditions by instating "high-risk pools."

"You take people that have pre-existing and costly conditions and put them into a high-risk pool," Pence said to NBC's Chuck Todd. "And you subsidize that so that it is affordable to those individuals."

If "high-risk pools" sound familiar, that's because they were once part of the U.S. public healthcare structure before the Affordable Care Act.

And, yes, they were subsidized as well, as Pence recommended for future pools. Their funds came from insurer assessment fees, as well as from federal and state tax dollars.

But premiums were still high in spite of these subsidies: 125% to 200% more than average premiums in the individual market at the time, reported Time on April 27. And deductibles were as high as $10,000 per year.

On top of all that, the vast majority of those 35 states with "high-risk pools" imposed lifetime limits on health coverage. Others adopted coverage limits of $75,000 per year.

So burdensome were the costs associated with high-risk pools prior to Obamacare that, over time, people with pre-existing conditions began applying for long-term disability. This shifted the cost of their healthcare expenses to U.S. taxpayers.

Back in October 2016, specialty drug prices grew 18.9% - and they're projected to increase another 18% this year. Despite the staggering increase, Americans still aren't living as long as those in other countries...

On the principle I think it's a good decision. Let the states decide how they want to insure their people. And let the competition roll. Small states can also team up to increase the pool.
A national policy will average down the whole country; everything so easy when it's not your money.
I.e. CA brags times and times again that it's the sixth biggest economy in the world. They should be able to afford that, piece of cake.

Just one initial question… who's problem IS it to take care of a person's health, and their illness? Somehow, in all of this, that one point is ignored.

Is it not just natural that SOME people could end up penniless if that is what it takes to keep their body alive? Where are all those people that preach evolution? You know, survival of the fittest? At some point, each person's health and survival is their own responsibility.