Since then, the company has weathered three of the biggest financial crises in U.S. history: the stock market crash of 1987, the dot-com bubble, and the Great Recession.

Today, it's the most valuable company in the world, with a market capitalization of $790 billion.

Of course, this title may not come as a surprise for those who invested in the computer company at its IPO date 37 years ago. 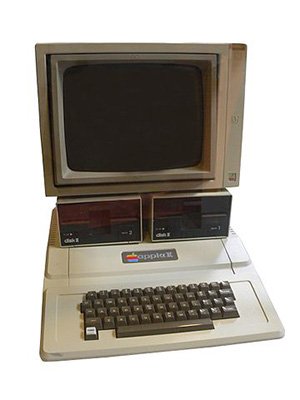 AAPL shares sold out right away – all 4.6 million of them (each worth $22 at the time). Venture capitalist firm Venrock – owned by the Rockefeller dynasty – bought 3.8 million shares alone. By closing bell, Apple had increased in value 32% to close at $29, creating $300 million more in market cap than any other IPO in U.S. history at the time.

Since that day, Apple stock has split four times. These stock splits served to make shares easier to buy for individual investors. For example, during Apple's most recent stock split in 2014, shares went from trading at just under $700 each to under $100 each – a "seven-for-one" stock split.

Here's a historic look at Apple's four stock splits over the years:

Through all these splits, a single $22 share purchased back in 1980 would have multiplied 56 times into 2,520 shares today. 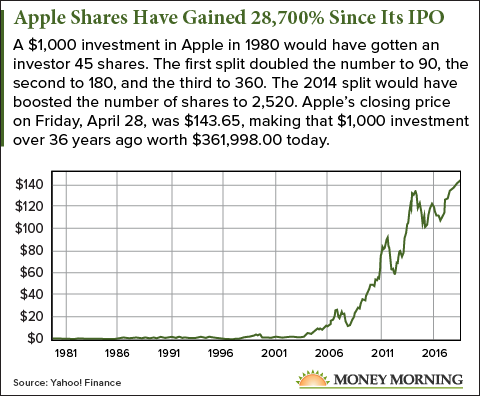 And that doesn't include investor perks like dividends and buybacks. Apple has paid dividends annually since 2012. It's spent $144 billion total on stock buybacks in the past five years as well…

Which brings us to what makes Apple's earnings report this afternoon so special.

Time for an Apple Income Bonanza?

Apple investors – recent shareholders as well as loyalists who've been with the company from the beginning – expect nothing short of historic results.

And for good reason…

Today's earnings report just happens to be the time of year that the company revisits its "capital allocation programs," which are investor initiatives that come in the form of dividends and stock buybacks. Such investor return programs serve to reward shareholders even more for their loyalty with added cash (dividends) or extra stock (buybacks).

Apple's investor return program in particular has increased over $200 billion in the past five years – from $45 billion in March 2012 to $250 billion this quarter.

These incentives, combined with the AAPL share price surges of late, have investors on the edge of their seats today in optimistic anticipation.

In fact, we're more optimistic than the mainstream financial media and Wall Street – both institutions that consistently fail to hit the mark with their Apple stock price targets.

"I think the whiners are out in left field," Fitz-Gerald told host Stuart Varney. "They say Apple's got too much cash, Apple doesn't understand its products. I think Apple understands exactly what it's doing and they know exactly where they're going."

Here's where we expect Apple to go from here…