The best way to play tech stocks in 2017 is to identify revolutionary technology now that will change the way the world works in the future.

And Money Morning Director of Tech & Venture Capital Research Michael A. Robinson has done that for you. He has just discovered a profit opportunity in the trillion-dollar Internet of Everything (IoE) market. 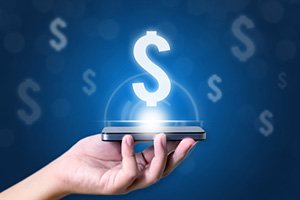 "There's a lot riding on the line here. Over the next two decades, the IoE will have a business and economic impact worth between $14 trillion and $25 trillion," Robinson said on April 28.

You see, the IoE will be a trillion-dollar market because it could make life easier and more efficient for entire cities of people…

Investing in Tech Stocks Through the Emerging IoE Market

Tech giants know the potential of the IoE, and they are already spending billions to enter the market.

For example, Alphabet Inc. (Nasdaq: GOOGL) purchased Nest Labs in 2014 for $3.2 billion. Nest makes smart thermostats, which allows users to control the temperature inside their house through a smartphone.

Through Amazon.com Inc. (Nasdaq: AMZN), you'll never have to worry about leaving your garage door open ever again. Amazon's smart speaker Echo can sync with certain garage systems and let you know whether your garage door is open. If it is, you can close it from any location. And that's just the tip of the iceberg for the Echo's capabilities. Users can sync many of their home's "smart" devices to the Echo.

The IoE is already changing how we live our day-to-day lives, and for cities, the IoE will be even more impressive…

How the IoE Works

A company called Sensity Systems makes smart street lights that do much more than just turn on and off lights with sensors. Its Light Sensory Networks can measure temperature, air quality, humidity, snow depth, and human activity.

According to Business Insider, New York City launched a car program in 2015 that tracked where drivers made sharp turns or hard brakes because of traffic. City officials could potentially use the data to see if road conditions need to be improved and figure out ways to alleviate traffic.

But this revolutionary technology can only work through cloud-computing companies.

"The IoE will create a tsunami of data that will be stored in remote data centers so it can be accessed from anywhere in the world," Robinson said.

And while it's easy to see why cloud computing is so important, we know the stock prices for the best cloud-computing companies are already steep.

However, Robinson has discovered a way to own shares of these tech giants at a fraction of the cost of their current stock price.

Trending: A Surprising New Industry Is Investing in Drones

"But don't just focus on recent gains. This will be a great growth play you'll want to own for years to come if you intend to get on the road to wealth – paved by tech," Robinson said.

For Tech Stocks in 2017, Make Sure to Own This IoE Investment