The highly anticipated new "RyanCare" bill has been drafted; the House will vote on it today, with supporters hoping to repeal and replace Obamacare. 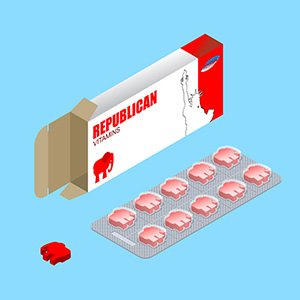 But it's got a major problem.

In order to pass, this GOP healthcare bill needs to win over the moderate Republicans who were dissatisfied with the first version's lack of coverage for Americans with pre-existing conditions.

It does take steps to do that -- but still falls massively short.

Will moderate Republicans get on board?

Earlier this week, it looked like the legislation wouldn't get the necessary Republican votes to pass (never mind from Democrats). That's because the original bill included state-sanctioned "high-risk pools" to cover those with pre-existing conditions. However, it didn't preserve a rule banning insurance companies from charging those sick individuals exorbitant premiums...

So exorbitant that the more moderate House Republicans wouldn't support it.

So, members of the House GOP huddled again to quickly address this concern.

And yesterday, they revealed their solution...

But there's a problem with this new solution, too.

That extra $8 billion won't be enough.

According to several analysts and experts, the funds the AHCA bill now provides still fall incredibly short of the amount states will need to keep high-risk pools afloat.

Larry Levitt, a senior vice president at the Kaiser Family Foundation, a nonpartisan health policy think tank, said "based on old experiences and the number of people with pre-existing conditions, high-risk pools need a lot of money put toward them to be effective," reported The Associated Press yesterday.

Conservative analysts James C. Capretta and Tom Miller told The New York Times yesterday that "in order to operate functional high-risk pools in all 50 states, the federal government would need to provide $15 billion to $20 billion annually."

And a separate analysis from Emily Gee and Topher Spiro for the left-wing Center for American Progress claimed that high-risk pools would need $327 billion over 10 years, reported Business Insider this morning.

All of these estimates leave the AHCA as it stands well short of the funds states will need under the current plan.

Regardless, we predict the new GOP healthcare bill will get voted through today...

Why the New GOP Healthcare Bill Will Still Pass

One reason the bill will likely pass today is because of the optimistic momentum Upton's reversal of support added.

Another reason: The vote today takes place right before a scheduled House recess. If left up for more debate, the unpassed healthcare bill would mean more lobbying against the measure from constituents at home for GOP House members.

Finally, the GOP needs a legislative success under its belt. Passing the bill today would signify a hard win for both President Donald Trump's administration and for Republican leaders in Congress, as well.

Many individuals are shirking health insurance altogether and rushing to herbal remedies instead - to medical marijuana, in particular.

Want to Invest in Weed and Don't Know Where to Start? Well over half of the country already has marijuana legally available in some form. Eight states plus our nation's capital have made it completely legal to anyone over the age of 21. And the marijuana stock market is preparing to take off. Watch this short video and see whether jumping on this moon-bound stock rocket is right for you.

SUGGESTION…ADD TO THE HIGH RISK POOL ALL THOSE IMMIGRENTS WHO HAVE NOT APPLIED FOR CITIZIANSHIP AND ADD ALL RETIRED GOVERNMENT OFFICIALS, IE SENATORS AND CONGRESSMEN. ME THINKS THAT WOULD EVEN OUT ANY OVER CHARGES!!!

Here's a novel idea, why don't people take more interest in eating healthy and taking care of themselves so we don't have this rediculous health care catastrophie. Going even further, why doesn't the Trump administration take a huge step to start a momentum against our tainted food supply, gmo, hormones, antibiotics, factory farmed raised animals, all the things that are making our population sicker and sicker at younger and younger ages. If people refused to buy the crap that these food companies shoved down our throats and demand better healthier food, we wouldn't have the healthcare issues we are seeing now. But when corporate America can't make their huge profits off of American people the government turns its back despite all the scientific proof out there that points to food is health or lack of it.

Let the states come up with the rest of the money for pools. It's harder to buy or bully all 50 states than just Washington DC.