Editor's Note: It's getting rough out there in the markets, with no shortage of threats to your hard-earned cash. But Bill's going to show you the same thing he showed his paid-up Private Briefing readers – how to spot trouble before it starts eating your returns. Here he is…

My wife, Robin, likes to tease me that I'm a creature of habit.

She's right, of course (as she usually is).

This is especially true with books or movies that I really like. There are a handful of flicks that I've watched 20 times during my life. And there are books that I've read an equal number of times.

One of those "favorite" books is "Baa Baa Black Sheep," the autobiography of U.S. Marine Corps ace Gregory "Pappy" Boyington. Pappy got his nickname (he was also known as "Gramps") because he was commanding a squadron of 20-somethings at the advanced age of 31 – ancient for a combat pilot at the time.

Boyington, who'd also flown for Claire Chennault's American Volunteer Group (AVG), more popularly known as the Flying Tigers, shot down somewhere between 22 and 28 planes (depending on the account), making him a quadruple ace. He spent time as a POW. And he won the Congressional Medal of Honor.

Boyington was flamboyant. And he was controversial. But he was also a difference-maker when America needed such personalities. And he was a guy I wish I'd had the chance to meet. 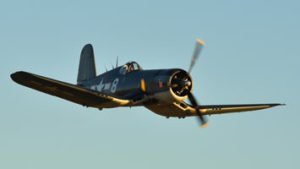 We want to be a "difference-maker" for you.

I was thinking about Boyington this past weekend because of a story I remember him telling in an interview, or in his book, about one of the dogfights he and his "Black Sheep" (VMF-214) fought on one of their missions. Fighter planes – American Corsairs and, most likely, Japanese Zeroes – were wheeling all over the sky.

The No. 1 lesson they told fighter pilots back then was to never forget to keep looking around. And in this dogfight, Boyington said, you almost had to be able to look everywhere all at once – just to survive.

The "cardinal sin" of aerial combat is a miscue known as "letting your head get up and locked" – meaning you're not constantly scanning… you're not trying to spot any and all possible threats. Forget that key rule, and commit that cardinal sin in a dogfight, and you risk getting shot down – "getting flamed," as fighter pilots used to say.

I thought about that story quite a lot this weekend – and for good reason: As investors, we're in a market dogfight right now, with threats zooming and wheeling all around us. More than ever, we need to be hypervigilant. We want to knock off a few victories – winning trades of our own.

And the key to all of that – to surviving and thriving in the freewheeling, rough-and-tumble stock markets of today – is to avoid being flamed because we weren't paying attention.

We're going to help you keep that from happening.

Then we're going to help you get a few victories of your own.

Let me show you what I mean.

The Biggest Threats We Face

If we're honest about what we face now – and conduct a real "threat assessment" – we have a lot of things to watch.

And I'm not just talking about stocks that are at or near record highs.

Let's look at some of the threats we're facing right now – and then come back and talk about what you can do to avoid calamity… and to be opportunistic yourself.

At the end of the day, how stocks – and even our economy – fare has as much to do with psychology and emotion as anything else.

16824 Reads
These 3 High-Yield REITs Pay 8%, 10%, and 12% Dividends
REITs produce gobs of cash from rent and other fees generated from properties including office buildings, storage units, multifamily units, and more.