Investors have been loving this bull market, but the next stock market crash could happen sooner than you think...

Not only are we still riding a nine-year bull run, but the Trump rally has sent stocks soaring even higher. Since the market bottomed out after the 2008 stock market crash in March 2009, the Dow has risen nearly 200%. With only a few mild market corrections, the bull market has raged on. 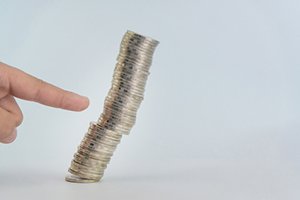 That's been especially true since Election Day in 2016. The Dow has surged 15% in the five short months since Donald Trump won the presidency on Nov. 8.

But these soaring highs could be a sign of a stock market bubble...

According to the indicators we'll show you in just a bit, stocks are currently valued at historically high levels. When stocks are trading at such high levels, one unexpected event could send stocks tumbling. That could be anything from military action with North Korea, President Trump's proposed tax cuts failing in Congress, or even higher interest rates from the U.S. Federal Reserve.

But that doesn't mean it's time to panic. Prepared investors can protect their money, and profit, during a stock market crash, and we'll show you just how...

What History Can Tell Us About the Next Stock Market Crash

Risky speculation pushing up stock prices has historically been a cause of stock market crashes.

Take the stock market crash of 1929. The Dow skyrocketed 300% in the seven years preceding the infamous Black Tuesday. But stock prices weren't driven entirely by a flourishing economy. The sense that stocks could only rise gave way to amateur investors taking excessive risks to buy stocks. During the 1920s, these amateurs borrowed over $120 billion (inflation adjusted) to buy stocks with.

The problem was that stock prices do not always rise. When the market dove on Sept. 29, 1929, stock traders panicked and sold their assets. The panic was so severe some stocks couldn't be sold no matter the price.

This time, the risky speculation came in the housing sector. But because Wall Street firms were packaging up mortgages and trading them like stocks, the effects of the housing bubble inflated asset prices across the board.

Housing prices doubled between 1996 and 2006. This led to the mistaken belief that housing prices would always go up. In turn, that led to a risky pattern of behavior. Home buyers were willing to buy overpriced houses with subprime mortgages, banks relaxed lending standards to the point nearly anyone could buy a home, and Wall Street bought up these risky assets and traded them like they were as safe as U.S. Treasury bonds.

This worked out for everyone until home prices fell. The housing crash would bring the stock market down with it as these risky mortgages turned to foreclosures in a matter of months.

Now, we are seeing very similar signs of risky behavior driving up stocks beyond their real value, and that could lead to a market crash in 2017...

Why the Next Stock Market Crash Could Be Coming

The Trump rally sent stocks surging on the back of trader optimism about future economic growth. But that's pushed stocks to overvalued levels. And an event that undermines this trader optimism could start a major correction.

And we have some context for this historically high value. Before the stock market crash in 2008, the Shiller PE ratio hit a high of 27.4. That means stocks are valued 8% higher than they were before the last market crash.

But how did we get here?

The simple answer is a period of historically low interest rates following the Great Recession have made money, and stock buying, extremely easy.

In the wake of the financial crisis in 2008, the Federal Reserve slashed interest rates from over 5% to 0.25%. Interest rates remained below 1% until just this year. While the Fed cut rates to make borrowing money cheap, it hoped businesses would use the cheap money to expand and grow the economy. Instead, they bought stocks.

Publicly traded companies bought over $2 trillion worth of stocks between 2008 and 2016. That's helped boost stock prices and encouraged investors of all stripes to jump into the stock market. But the era of cheap money won't last. The Fed is likely to raise interest rates at least two more times this year alone.

That means stocks won't be boosted by cheap money any longer. And that makes the market susceptible to a destabilizing event that could send share prices plummeting.

But Money Morning readings shouldn't worry. We encourage investors to be prepared in the event that we see a market crash, which is why we've put together a stock market crash survival guide...