Despite the price of gold being up 6.8% in 2017, the metal has been in full sell-off mode recently.

And the May FOMC meeting this week made matters even worse.

The 5.3% drop in gold prices from their April 18 high of $1,294 to their recent $1,225 level should not surprise you. I've been telling you recently that gold would likely fall back to that level.

And by all accounts, it seems the latest "Fedspeak" helped drive what might be the final nail for this gold correction.

After the two-day meeting, the FOMC held interest rates steady at the current 0.75%-1% range and downplayed economic weakness in Q1 as "transitory." The Fed also emphasized a strong labor market to support its stance that two more rate hikes were still likely this year. It also went on to say consumer spending remained strong, businesses were still investing, and inflation was still near its targets.

That helped push the U.S. dollar higher, while the gold price sank to a six-week low. But the dollar's bounce didn't last long and eventually gave up all of its gains and more as gold bounced by Thursday morning.

Now it's looking like gold's retreat from $1,289 to $1,225 may have exhausted itself. If I'm right, we could see a reasonable bounce from here.

I'll tell you exactly where I see the price of gold heading over the next two months. First, let's look at how the metal moved before and after this week's Fed meeting…

After closing at $1,268 on Friday, April 28, the gold price started this week lower at $1,263. It weakened throughout the day as the dollar gained traction. The metal eventually settled at $1,255 for a 1% loss on the day.

Trending: This Is How You'll Profit from Gold This Year

As markets on Wednesday began anticipating the Fed meeting outcome, the dollar strengthened and dragged the price of gold lower. It opened at $1,254 and dropped to $1,249 by the afternoon.  Then, as details emerged on the Fed's decision to stand pat on interest rates, the U.S. Dollar Index (DXY) jumped from 99.10 to 99.40. That pulled gold prices down 1.3% to $1,241 by the close. 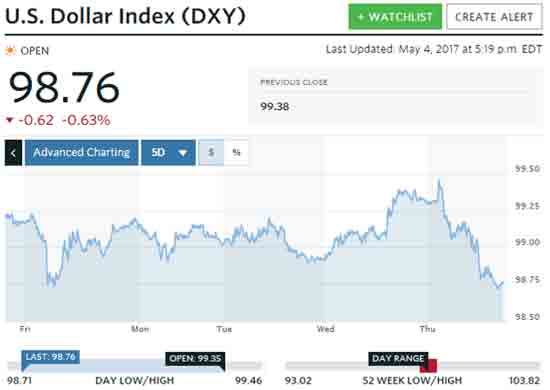 On Thursday, risk-on trading kicked back into high gear as investors moved into stocks and away from gold. The DXY also sold off throughout the day, ending around 98.75. And despite the normal support that gold prices get from a weaker dollar, the metal hit an intraday low of $1,225. It eventually logged a 1% loss on the day at $1,228, a level not seen since March 16.

Despite trading near its lowest level in six weeks, I expect it to rebound over both the short term and long term.

Here are my targets for the gold price this year…

My Bullish Outlook for the Price of Gold in 2017