As China warns President Donald Trump not to withdraw the United States from the Paris Climate Accord, the new POTUS must prepare to face headwinds at his first-ever G7 in Sicily later this month... 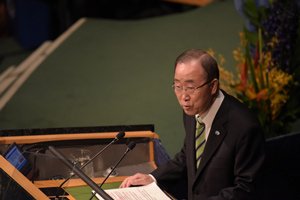 UN Secretary General Ban Ki-Moon speaks at the signing of the Paris Climate Accord on April 22, 2016

You see, seven major world leaders (from the United States, Germany, Japan, France, Canada, the United Kingdom, and Italy) will meet on May 26 to talk global economics, international security -- and energy policy.

The conference is critical to Trump's anti-globalization agenda.

But the director of China's National Center for Climate Change, Chai Qimin, suspects that U.S. withdrawal from the Paris Climate Accord - originally signed on April 22, 2016 - will provoke world leaders to distrust the new U.S. president; the U.S.' withdrawal would insinuate a lack of international concern.

And so Chai issued this warning to the United States on May 5...

China Warns U.S.' Withdrawal from the Paris Agreement Is "Irresponsible"

"Definitely [a U.S. withdrawal from the Paris Climate Accord] will impact on other diplomatic arenas, already on G7 and G20, the Major Economies Forum as well," Chai said, according to Climate Home on May 5. "President Xi [Jinping] and our ambassador to the United Nations have said several times that withdrawing from the Paris Agreement is irresponsible, which will harm the mutual trust in the multilateral mechanism."

Chai then pointed to how that trust was built by former U.S. President Barack Obama. "Under President Obama, the U.S. was a key broker of the Paris agreement," he said.

To that point, the 44th president helped create the Green Climate Fund in particular - a portion of the Paris accord that promised upwards of $100 billion in financial aid to help developing nations "go green" over time. Obama initially pledged $3 billion to this fund and had sent $500 million to it thus far.

But Trump's March 16 budget proposal for FY 2018 revealed his administration will seek to axe $2 billion from this pledge.

News of these cuts and the U.S.' withdrawal from the accord altogether has prompted other global leaders to speak out against President Trump, as well...

"Of course it's a betrayal, to be honest," said Ethiopian diplomat Gebru Jember Endalew to Climate Home. Endalew is the head of the 48 least developed countries negotiating group. "At this stage when most of the political leaders are actively engaged, they are well aware of the issue. So, I feel that if the U.S. withdraws [from the Paris Climate Accord], it's a betrayal to the global community - especially the least developed countries and the most vulnerable groups of countries."

"I do think that there's going to be repercussions," Paula Caballero, director of the World Resources Institute climate program, told Climate Home. "If he were to announce a withdrawal before the G7 summit begins in Sicily, just a week after this round of climate talks ends, Trump would find himself confronted with incensed and uncompromising leaders."

It just so happens that today, Trump's advisors postponed another meeting on whether the United States should remain in the Paris climate agreement or not.

And while diplomatic opinions of the world seem to be slowly turning more negative toward the Trump administration regarding climate change, the French attitude in particular has grown downright nasty.

Money Morning's own climate and energy expert, Dr. Kent Moors, can attest to this fact.

Moors has been writing about the investment opportunities around the Paris accord since its inception and recently noted that Paris is less fond of America than ever before...

From Paris, Without Love

"Sure, the French have always been dismissive, even haughty, when it comes to us Yanks," Moors wrote from France on Feb. 3. "But nothing like this..."

Up Next: One gallon of this new "crystal fuel" could get you from New York to L.A. and back... seven times! Being hailed by many experts as energy's "Holy Grail," it's 1,693 times more powerful than the gasoline that runs your car. The mainstream investment media isn't even talking about it yet. Read more...

Stupid. Who cares what China and the French think. The first is the worst pollutor in the world (has it hurt their standing?). The other never has won a war and depends on us spending billions of dollars a year for there defense. SSHHHHH

Save a 100 Billion instead of just 2 Billion Dollars or instead negotiate with individual countries that truly need assistance with a win win for both sides. Let all major powers pony up 100 Billion each if they want the US to stay in such an agreement.

carbon tax an control climent temps were faked !!! look it up!!!

No modern industrialized nation has done more to mitigate the negative effects of air, water & soil pollution than the United States. No modern industrial nation has done more to pollute the human bio-sphere than the People's Republic of China; e.g. 40% of the current level of air pollution; i.e. smog & carbon particulates in San Francisco, California can be attributed to China. The Paris meeting on "Climate Change", in and of itself is an entirely different matter. Does 'Anthropogenic' climate change present a clear & present danger. That aside, it is totally hypocritical, and intellectually disingenuous for the Chinese to criticize America on possibly not attending the meeting in France. China would do better to attend to her own shortcomings, as far as this issue goes.