In Dow Jones news today, the Dow fell as oil prices continue to slide with no end in sight. 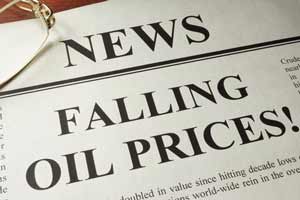