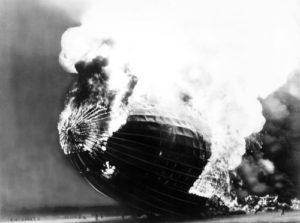 Now that the Hindenburg Omen is signaling again, traders are wondering if another stock market crash is coming.

What Causes a Hindenburg Omen?

The Hindenburg Omen occurs when these four events happen on the same trading day. According to Investopedia, the first two events are:

In other words, some stocks are being bid up to new highs as other stocks are bid down to new lows. At the same time, traders are pulling money out of the market even as the index is trading above its recent average.

While these metrics are specific, they are an indication that traders are very uncertain about the future direction of the stock market. A high amount of uncertainty among traders could signal a market correction is coming.

Jim Miekka, the mathematician who developed Hindenburg Omen, has argued it's only meant to warn investors.

"It's sort of like a funnel cloud," Miekka told the WSJ in 2010. "It doesn't mean it's going to crash, but it's a high probability. You don't get a tornado without a funnel cloud."

Investors are right to be skeptical of an overly specific predictor of market events. It's possible to retroactively connect unrelated data to specific historical events, or it's even possible Miekka's indicator is simply a coincidence.

Why Investors Should Prepare for a Market Crash in 2017