The biggest profits we're eyeing from energy investing in 2017 stem from three major trends we will show you today. 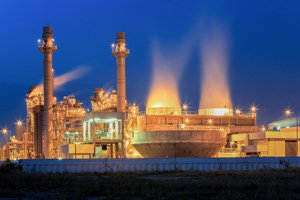 As of early May, oil sits below $50. That's bad news for U.S. oil drillers who spend a lot of money getting oil out of the ground.

A century and a half of successful oil drilling has left the United States with no more cheap-to-get oil. While the horizontal fracking revolution has made it possible to drill oil that was previously inaccessible, it's expensive. As ConocoPhillips CEO Ryan Lance has put it, "Forty-dollar to fifty-dollar oil prices don't work in this business." ConocoPhillips is one of the world's largest shale producers.

The U.S. oil industry desperately wants to see oil prices rise. Money Morning Global Energy Strategist Dr. Kent Moors expects prices to rise to $56-$58 by later this year, but they will likely remain sluggish for the time being.

But Kent knows where to look for profits when prices are flat or falling. Kent scored up to 314% gains for his Energy Advantage subscribers from 2012-2015 with Valero Energy Corp. (NYSE: VLO) stock. Oil prices fell by 61% over the same period.

Now he has identified three major trends to capitalize on while oil prices tread water.

First, energy investors can take advantage of rising demand in China, where the government is making massive investments in energy infrastructure that will benefit energy companies for decades.

Second, the squeeze on U.S. shale companies means bankruptcies and consolidation ahead. Investors can keep their money in the United States and profit from the coming M&A boom.

And third, the landscape of the energy sector in the U.S. is shifting. Fossil fuels won't become obsolete any time soon, but clean energy production is on the rise.

Let's take a closer look at these moneymaking trends, plus cover five energy stock picks for profits in 2017 ...

Expansion in any economy means expansion in energy demand. So it's no surprise that China is the biggest driver of energy demand in the world today. China already accounts for nearly one-quarter of global energy consumption. And the U.S. Energy Information Administration (EIA) predicts that China and India will be responsible for more than half of the world's energy demand growth between now and 2040.

China's government has taken an active role in the energy sector, especially with the One Belt, One Road initiative. The plan - also known as the New Silk Road initiative - calls for a $4 trillion to $8 trillion investment in transportation and energy infrastructure connecting China with the rest of Eurasia. Construction has already begun on several railways, and future projects include roads, pipelines, and utility grids along major trade routes.

That makes China an important market for energy investors. In fact, between China and India, Kent says the shift in energy demand (and crude oil demand specifically) toward Asia will be "the dominant trend for at least 20 years, if not more."

It's a trend investors can't afford to overlook, and in a moment, we'll identify a stock set to benefit from China's rising demand. But first let's look at the second major trend in energy...

In fact, as Kent points out, yields for high-yield energy bonds have "exploded" in the last few months, with double-digit annualized rates. So expenses are rising for shale companies just as their revenue is dwindling.

This squeeze from both sides means many of these companies will have to sell their assets to stay afloat.

It might seem logical for investors to cut and run under these circumstances. But smart investors can profit by identifying companies that are about to be acquired and ride the wave upward as the deals are made.

The key is selecting companies with assets that will be profitable when oil prices find a steady balance between supply and demand - i.e., companies that more cash-rich competitors will want to buy up.

We'll highlight three shale oil companies that will likely benefit from the coming M&A boom at the end of this article. Now, let's move on to the third and final trend in energy...

Energy Independence and the Rise of Clean Energy

We're entering a new age in the energy sector. While the rise of renewable resources has some sounding the death knell for fossil fuels, the reality for the next decade at least will be a balance of oil, natural gas, coal, nuclear, and renewables.

The growing abundance and cost efficiency of these various energy sources means that the United States could reach energy independence within the next decade. A January report from the EIA predicts that the U.S. will be a net energy exporter by 2026. 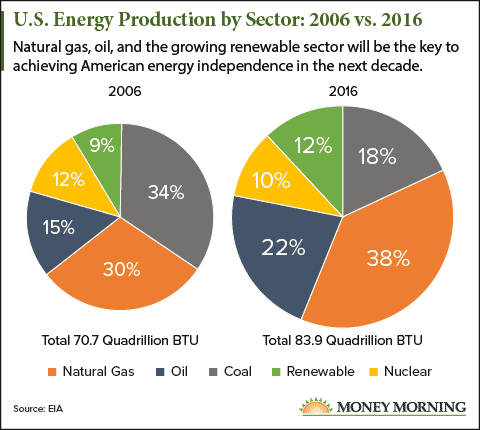 The increase in oil production doesn't mean renewables aren't expanding in importance. As of 2016, renewable energy provided about 17% of U.S. electrical generation. And a study by the U.S. Department of Energy's National Renewable Energy Laboratory (NREL) projects that number to rise to 80% by 2050.

In other words, clean energy and fossil fuels are on the rise in the United States. There is no single energy source that's going to dominate the next decade. That means plenty of opportunities for savvy investors. We're going to see the expansion of infrastructure on all fronts. So investors should be looking at companies that are positioned to thrive in a diversified energy environment.

Top Stock Picks to Profit from the Three Major Trends