Last Wednesday (May 3), Congress averted a government shutdown by passing a stop-gap spending bill. While many investors turned the page, the "debt ceiling 2017" was left unsolved, and that will create a much bigger problem in October. 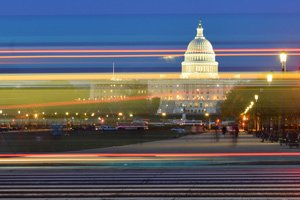 The debt ceiling and the government spending deal are separate issues. But some mainstream news outlets treat them as the same…

For example, Nasdaq posted a headline on May 1 reading "Futures Buoyed by Deal to Raise Debt Ceiling." That Nasdaq headline was wrong; Congress didn't raise the debt ceiling.

Here's how Congress actually made the debt ceiling crisis even worse, despite what you may have heard from the mainstream media…

The 2017 debt ceiling deadline will likely be reached in October, the same time the latest government spending deal expires. So Congress will have to deal with both a potential government shutdown and default at the same time.

The government hit the debt limit on March 15. Since then, the government has been using "extraordinary measures" to keep the government solvent. This is a process where the U.S. Treasury Department tries to free up money by selling off assets and delaying payments to certain programs, like the government's retirement fund. But the government will be forced to default on its payments if something isn't changed before the debt ceiling deadline.

If another agreement isn't reached, the government risks shutting down again just as it risks default.

The government can't borrow any more money without raising the debt ceiling. Without more money, the government has to pay for all of its expenses with the cash it has on hand. Since the government runs a deficit, it can't make all of these payments without borrowing more money.

The government gets a boost to its reserves in April when annual tax payments come in, but as expenditures mount through the year, the government slowly runs out of money. Last April, the government's revenue was $438,432,000,000, nearly double May's revenue and 26% more than December, the next most lucrative month. 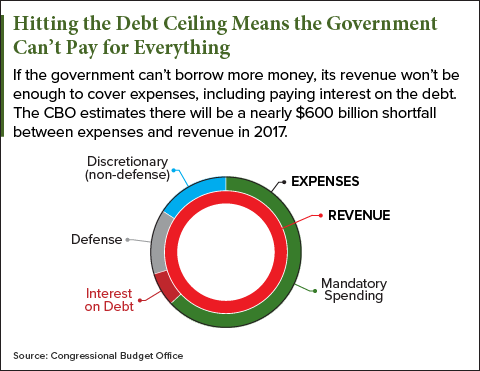 The Bipartisan Policy Center estimates the government won't be able to pay for all its obligations by around October 2017. That's because the government has a huge payment to the Military Retirement Trust Fund due in early October. Last year, the payment came on Oct. 3 and totaled $81 billion.

A big payment like that will deplete what's left of the government's funds. It also means the government won't be able to pay for the next big bill due, which could be its bimonthly interest payments. Those payments are expected to total over $23 billion in October and will be as high as $88 billion in December. Congress will need to lift the debt ceiling before October or the government could potentially default on a payment.

You see, Congress' latest spending measure only funds the government through the end of September. If another agreement isn't reached, the government risks shutting down again just as it risks default.

Of course, Congress can avert a potential shutdown crisis by passing a budget or raising the debt ceiling before then. But both of these issues have become controversial, making it unlikely Congress can act quickly on them.

The Senate has only passed one full budget in the last seven years, when Republicans passed their 2015 budget. Instead, yearly appropriations bills have been replaced by short-term continuing resolutions. At the same time, Congress' raising of the debt ceiling is no longer routine, and it led to gridlock in 2010, 2011, 2013, and 2015.

Congress will have to deal with two high-stakes issues simultaneously in order to avoid a default or shutdown this year. Even with a Republican majority in both houses of Congress, that looks to be difficult. Instead of passing a full funding bill this year, Congress narrowly avoided a government shutdown on April 28 with this short-term fix, and they needed to extend the deadline a week to do it.

On top of disagreements among Republicans over spending, there's also disagreement over the debt ceiling. President Trump's new director of the Office of Management and Budget, Mick Mulvaney, has previously said he's unconvinced a failure to raise the debt ceiling is a bad idea.

"I have yet to meet someone who can articulate the negative consequences," Mulvaney said amid the 2010 standoff.

Investors need to keep an eye on the debt ceiling developments, because it could cause markets to dive. Not only did Standard & Poor's downgrade U.S. debt after the 2011 standoff, but the stock market dropped as much as 10% in the weeks preceding the 2011, 2013, and 2015 crises.

And if Congress can't reach a deal and the government defaults on its debt, stocks could fall much more than 10%. But investors can prepare, and even profit, with the right strategy ahead of a debt ceiling crisis…

How Investors Should Prepare for Debt Ceiling 2017