Mainstream media outlets are asking the very same question about U.S. President Donald Trump — and it's a controversial one: Will Trump be impeached?

"Trump's critics are actively exploring the path to impeachment or the invocation of the Twenty-fifth Amendment, which allows for the replacement of a President who is judged to be mentally unfit." – The New Yorker, May 8

But is there any real evidence President Trump has committed an impeachable act? Or do these controversies amount to nothing more than allegations in "a liberal fantasy," as The Guardian puts it?

Below, we've compiled a roundup of the president's acts the mainstream calls impeachable. We'll examine whether any could amount to a high crime… 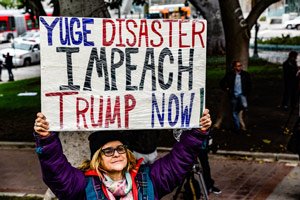 President Trump has many financial holdings that could arguably constitute "conflicts of interest," particularly if concrete evidence emerges from them that violate the Constitution's "emoluments clause."

The emoluments clause states that it is illegal for government officials to "accept of any present, Emolument, Office, or Title, of any kind whatever, from any King, Prince, or foreign State."

But as far as Trump's conflicts of interest are concerned, nothing has surfaced as definitive illicit "gifts" yet. Several watchdog groups, including the Citizens for Responsibility and Ethics in Washington, have filed lawsuits asking for the specifics of the president's business holdings to be made public.

If they are disclosed one day, and they contain proof that the president accepted financial offerings in violation of the emoluments clause, then Trump could be impeached.

No. 2: Trump's Claim That Former President Barack Obama Wiretapped Him

By law, the Trump/Obama wiretapping allegation that surfaced on March 4 had to be federally investigated. On March 20, FBI Director James Comey went on record as saying that Obama did not order a wiretap on Trump.

Trump's accusation, however, could be considered a "breach of position" on the basis that he made the accusation without proper evidence to back his claim.

"When President Trump accuses Obama of an act that would have been impeachable and possibly criminal," Noah Feldman, a professor at Harvard Law School, told the UK's Independent on March 8, "that's something much more serious than libel. If it isn't true or provable, it's misconduct by the highest official of the executive branch."

It's this "misconduct" that could prove impeachable, the legal expert argued — though without further explanation. We were unable to find clear legal support of his argument.

No. 3: The FBI Director's Firing

Various insider accounts based on anonymous sources indicated to Politico on May 9 that Trump's firing of Comey was motivated by his anger over the FBI's ongoing Russia investigation.

On the other hand, according to a CNN interview with White House counselor Kellyanne Conway that same day, Trump fired Comey because the director had "lost the public's confidence, the confidence of Republicans and Democrats."

If a separate investigation were to one day find that Trump terminated Comey's job to smother the ongoing FBI inquiry into his Russia ties, Trump will have violated the law by obstructing justice – an impeachable offense under the U.S. Constitution.

Trump's team argued that his travel bans – first issued on Jan. 27 – were about blocking possible terrorists rather than keeping Muslim immigrants in particular from entering the country. But some question the White House's motives, as the bans left out many of the countries that have actually perpetrated terrorist attacks on America.

If Castro's suspicion turns out to be true – that Trump bypassed judicial procedure with such an order to Border Patrol – it would constitute an impeachable offense on the president's part because it would have been an obstruction of justice. This investigation is still ongoing.

Trump critics point to a spider web of connections — some public, some private, some clear, some murky – that exist between the president, his associates, and Russian President Vladimir Putin

For example, on April 12, The Wall Street Journal reported that a federal judge issued a warrant after finding "probable cause" that Carter Page, one of a small group of advisors to the president's campaign on foreign affairs, had been acting as an agent of Russia at the time of his tenure with Trump.

And ousted NSA Director Michael Flynn was subpoenaed by the Senate Intelligence Committee on Wednesday for Russian involvement. Trump fired Flynn three weeks after the start of his presidency after the retired general misled Vice President Mike Pence about conversations he'd had with the Russian ambassador to the United States regarding economic sanctions. Former Acting Attorney General Sally Yates testified on Monday that she warned the Trump administration that Flynn had been compromised and could be potentially "blackmailed by the Russians."

Still, after months of "explosive" reports, no clear links establish that Trump has had a treasonous relationship with Russia.

If that changes and there is evidence otherwise, treason is an impeachable and criminal offense.

According to The New Yorker on May 8, "Trump's critics are actively exploring the path to impeachment or the invocation of the Twenty-fifth Amendment, which allows for the replacement of a President who is judged to be mentally unfit."

This provision – adopted on Feb. 10, 1967 – was created as a backup plan to enact should a president become so mentally incapacitated he cannot responsibly fulfill his duties as president any longer. The amendment's creators, however, left it intentionally vague enough to give Congress and the executive branch some wiggle room in determining what kind of condition the president would need to be in to get removed. 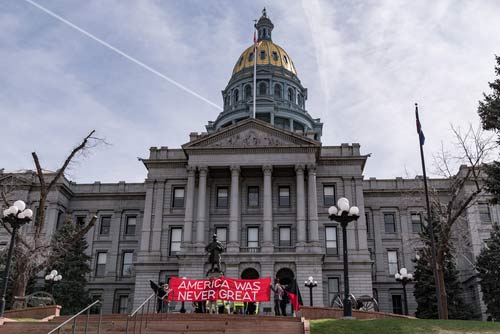 Many demonstrators have called for Trump to be impeached since his Jan. 20 inauguration. But the prospect looks almost impossible with his Republican Party in control of both the House of Representatives and the Senate.

You see, both houses would have to vote on the move. The U.S. Constitution requires a simple majority in the House to impeach a president for "treason, bribery, or other high crimes or misdemeanors." The Senate must then garner a two-thirds vote in order to impeach President Trump.

Speaking of Congress, both branches are currently in a political tug-of-war with President Trump right now over medical marijuana.

You see, Congress says that President Trump can't crack down on state-legalized medical marijuana programs, but the president disagrees.

Whether or not the POTUS and Congress can come to an agreement in the near future doesn't change this fact, however: Many Americans are shirking health insurance and rushing to herbal remedies instead…

And to medical marijuana, in particular.

In fact, data from last year revealed there are over 2,604,079 medical marijuana patients in the United States right now – and that number is growing, according to the Marijuana Policy Project.

You see, there are investment opportunities aplenty in this growing market. Our Director of Technology & Venture Capital Research – and pot stock expert – Michael Robinson knows a few dozen tiny stocks that are set to deliver potentially once-in-a-lifetime windfalls. Click here to learn more…

What I would ask is "What would be the effect of a Mike Pence presidency?"
I believe that Pence would not provide the sound bites that the Media Freaks love so much, but as an experienced administrator and bloq builder as governor of Indiana, he would quietly build a much more dangerous bulldozer of human liberties than Trump has done. He seems to be more evangelically comitted to limiting access to abortions, legalized pot, voting rights, union membership, universal health care, protection of the environment, etc.

Trump impeachment is a liberal dream and the media and the left should get off this subject. Remember next party in control will face the same thing.

Trups need to be told-You are fired.
This president is a shame.

Donald Trump seems to operate by emotion and instinct, at least as often as by reason. That may have worked for him as a businessman. He was obviously correct more often than not, since he became very wealthy. Still, he declared bankruptcy several times in various businesses, so he was far from infallible. Such semi-rational behavior with foreign leaders could lead to war and devastation, whether we win or not. Is that the sort of leader we want in the White House?

Very disappointed in your generalities and half-truths on the impeachment story. No central writer, huh, just a collection of folks doing the story. Virtually ever one of your key points told only half the story. CNN like?

So Money Morning is now citing garbage news as references? Your continuance of bashing President Trump is really a sad commentary on those of your staff. If I wanted to hear this garbage, I would read Yahoo News!! I pay for information on the financial world and not your biased opinions!! Stop with the Trump bashing!

Stick with the financial news and financial advises !!!
Don't be the left mainstream media. I have enough of that !