Gold prices are firmer in pre-U.S. session trading. Bargain hunters have stepped in to buy the recent price weakness.

The geopolitical front remains relatively calm at present, which is bullish for world stock markets and bearish for safe-haven assets like gold. However, there remain serious matters that could flare-up at any moment, including the North Korea-U.S. confrontation and Middle East tensions.

The other outside market on Tuesday morning sees the U.S. dollar index lower and hitting a six-month low overnight. The greenback bears have downside momentum and have the overall near-term technical advantage. That means the path of least resistance for the dollar index will remain sideways to lower in the near term.

In overnight news, the Euro zone reported its first-quarter GDP at up 0.5% from the fourth quarter and up 1.7%, year-on-year. The closely watched German ZEW economic sentiment index rose to 20.6 in May from 19.5 in April. Eurozone exports were reported at a record level in March. These latest reports continue a string of generally upbeat economic data coming out of the European Union. 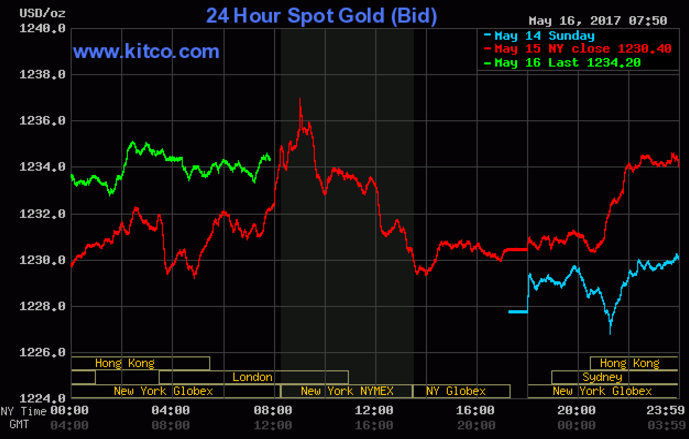