The Puerto Rico debt crisis is about to blindside many Americans who have no idea that they own a piece of the problem.

As tragic as the Puerto Rico debt crisis is for the people who live there, the unfolding bankruptcy proceedings will take a bite out of the retirement savings of millions of Americans.

"Puerto Rico's in an impossible position. It will never be able to pay off the debts it's amassed, never," said Money Morning Capital Wave Strategist Shah Gilani. "If money managers stateside didn't get their investors out of PR paper, they should be fired, and the firms that hired them should be sued."

Puerto Rico officially declared bankruptcy May 3. That triggered the start of a process that will determine exactly how the financial pain will be distributed.

An initial hearing is scheduled this morning (Wednesday) in San Juan, with both the commonwealth and its creditors in attendance.

What few Americans realize is how much they have much riding on the outcome of the Puerto Rico bankruptcy...

Do You Own Puerto Rico Debt?

You see, many municipal bond and mutual funds -- including many commonly held in retirement portfolios -- hold billions of dollars' worth of Puerto Rico debt. How much any given individual owns depends on which funds are in their portfolio.

But the chances are you own at least some Puerto Rico debt.

So how can you find out if you own Puerto Rico debt, and how much? We'll show you where to look...

First, the 1917 law that set the island's status as a U.S. commonwealth also exempted its debt from all federal, state, and local taxes. Second, Puerto Rico's bonds typically offered a higher yield than comparable municipal bonds. And third, investors considered them safe, since Puerto Rico was barred by law from declaring bankruptcy.

But the severity of the debt crisis has changed the calculus; in less than two decades, the island's debt more than quadrupled from $16 billion in 1999 to the current $74 billion.

When Congress passed PROMESA (Puerto Rico Oversight, Management and Economic Stability Act) last June, it created an eight-member oversight board with the power to allow the commonwealth to declare bankruptcy - which it now has done.

The Puerto Rico bankruptcy means bondholders are going to take a major haircut. The only question is how severe the losses will be.

After the legal wrangling ends, these losses will show up in the retirement statements of millions of Americans.

And those losses may cut very deep...

Estimating how much investors will lose in the Puerto Rico bankruptcy is not a one-size-fits-all exercise because the commonwealth sold several different flavors of bonds issued by 18 different government entities.

Different bonds provided different and sometimes conflicting guarantees, which has left it unclear which bondholders are first in line and which will get little or nothing.

U.S. District Judge Laura Taylor Swain, appointed to oversee the Puerto Rico bankruptcy by Supreme Court Chief Justice John Roberts, will have the final say. But given the history of similar cases, most Puerto Rico bondholders will end up losing a third or more of their investment.

In Detroit's 2013 bankruptcy - the previous record-holder for the largest U.S. municipal bankruptcy -- bondholders ended up eating losses of between 30% and 40%, depending on the type of bond.

Puerto Rico has many more types of bonds, which will result in a wider range of outcomes.

For example, "junior" Cofina bondholders by definition are second in line to senior bondholders. This group may end up with nothing. 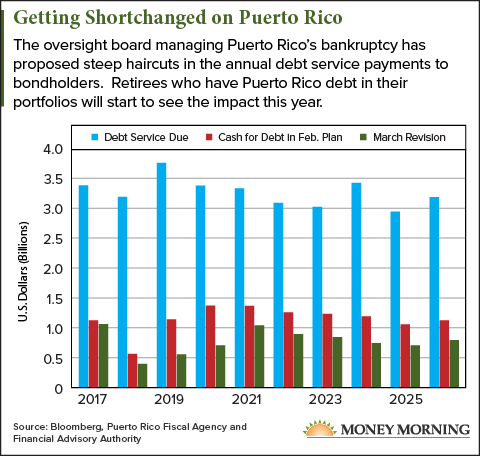 As for what sort of losses you can expect, the oversight board made several initial offers at the end of last month. These ranged from a haircut of $0.48 on the dollar for GO bonds to as much as $0.70 on the dollar for lesser bonds, such as those sold to finance highway construction.

After bankruptcy was declared, the oversight board sweetened its offer to GO bondholders to a haircut of $0.30 on the dollar.

Meanwhile, the board also has proposed slashing debt service payments by 80% -- another blow to those holding Puerto Rico debt.

So how can you find out if you own Puerto Rico debt, and how much?

We'll show you where to look...

How to Find Puerto Rico Debt in Your Portfolio

Americans need to check their retirement fund statements to see which municipal bond funds they own.

Once you have your list, find out how much of it, if any, is invested in Puerto Rico debt. Most of the companies that manage these bond funds have websites where you can look up the fund and get a list of every bond it holds.

Many investment firms will break down the fund's holdings graphically so you can see its exact exposure to Puerto Rico debt. Other companies, like Franklin Templeton, publish a list of all the funds they operate that own Puerto Rico bonds.

Also, don't assume you're in the clear because of the name of a municipal bond fund.

The Oppenheimer name is actually the first thing you should look for when scouting out your own exposure to Puerto Rico debt. Oppenheimer bond funds represent 17 out of the 18 with the most exposure to the commonwealth's debt, most with 10% or more.

Investors also should check on any exchange-traded funds (ETFs) they may own, as many of them also snapped up Puerto Rico debt to help boost returns. However, ETFs tend to hold much less Puerto Rico debt. The Absolute Shares Trust (NYSE Arca: WBIC) ETF has the most at 2%.

Donald Trump's $18.7 Million "Secret Investment": President Trump is just one of many billionaires taking advantage of a Great Depression-era "program" to build massive fortunes. A small group of regular Americans have begun to use them as well. And they're making millions. Could you be next? Read more...