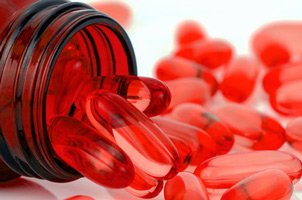 The current rally of Valeant Pharmaceuticals International Inc. (NYSE: VRX) is being driven by two things. While investors are viewing these two catalysts as bullish, they are really just temporary solutions.

After we review these short-term catalysts, we'll show you the long-term problems this stock is still facing...

Why Is Valeant Stock Rising?

The first thing is its earnings report on May 9. This is the first quarter in the last six that it has turned a profit. Plus, net income this quarter was $1.79 per share. Last year, the company lost $1.08 per share in the same quarter.

The earnings report also provided a bullish update on Valeant's debt repayment. At the end of 2016, the company had $29.8 billion in long-term debt. According to this last quarterly report, the company has repaid $1.3 billion of its debt.

The second catalyst for the stock this month is a new patent ruling.

On May 11, Valeant won its patent case concerning Xifaxan, the company's best-selling drug at about $1 billion in sales per year. There aren't many details since the file is sealed, but this does uphold the patent Valeant has for the irritable bowel syndrome with diarrhea (IBS-D) drug. The victory sent Valeant stock up 8.8% that day to close at $13.78 per share.

However, the stock is still down 6.35% year to date (YTD), and the company still has a lot to overcome...

Valeant Stock Is Still Trying to Overcome the Philidor Scandal

Back on Aug. 5, 2015, Valeant stock hit its all-time high of $257.53. By September of that year, Valeant executive Gary Tanner left the company amid allegations that the company's relationship with Philidor Rx Services LLC was potentially illegal. You see, Valeant was reportedly buying what it considered undervalued drugs and then raising the price by an average of 66%, according to a Deutsche Bank study. This rate hike was significantly larger than the rest of the industry, which averages a 22% hike.

Valeant ended the relationship with Philidor in October, but not before the U.S. Department of Justice opened an investigation into the business practices of the company.

On Nov. 17, 2016, Tanner and former Philidor CEO Andrew Davenport were charged with federal wire fraud and money laundering. And unfortunately that is not the end of the scandal for Valeant.

Both have pled not guilty and are awaiting trial. Once the verdict is reached, Valeant can hopefully put this behind it. However, that time has not come.

All of this uncertainty has taken a toll on the company's revenue. Valeant's revenue growth has been shrinking for seven quarters. On average, revenue shrank by 11.5% over the last four quarters. 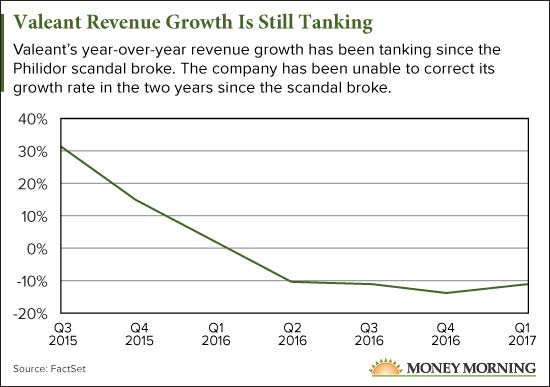 Until the company can resume revenue growth, we can't make a case to buy Valeant stock. The shrinking revenue shows it still has not fully recovered from the Philidor scandal.

We Banked 90% on Valeant's Plummet