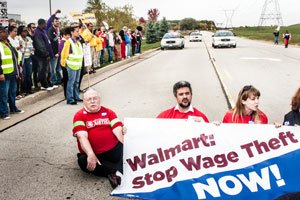 Protesters stage a sit-in protest, blocking the entrance of a Wal-Mart distribution center at a rally for Warehouse Workers Justice, Oct. 1, 2012.

But what readers need to know about the minimum wage debate - and what you won't hear from the mainstream media - is this:

That's because something far bigger and badder is about to impact minimum wage workers - and no one is talking about it.

Why the Minimum Wage Debate Is Obsolete

No one, that is, except Money Morning Chief Investment Strategist Keith Fitz-Gerald. He's long followed public discourse on hourly wages and believes the issue, as controversial as it's become, is a red herring.

"What people don't understand is the $15 minimum wage argument is irrelevant if a robot has your job," Keith says.

According to a January 2017 report from The McKinsey Global Institute entitled "Automation, Employment, and Productivity," the next 20 years are expected to produce a veritable robotics gold rush in America.

The report claims the manual labor and customer service industries will be hit especially hard. And because of this shift to workplace robotics, "millions of employees in these sectors could be forced to learn new skills or change career roles entirely over the next two decades," McKinsey claims.

Such a shift would wreak havoc on the economy, and Keith predicts that the "robot gold rush" will actually arrive sooner than McKinsey says - much sooner.

In fact, one subset of the manual labor sector is already experiencing an automation takeover...

The Rise of Big Rig-Driving Robots

"Nobody is thinking about all the truck drivers that will be unemployed when there are autonomous trucks," Keith says. "I've been following this information since I've been with Money Map Press. And I think automation-based job losses are only five years away."

In fact, the general public saw proof of it last fall... 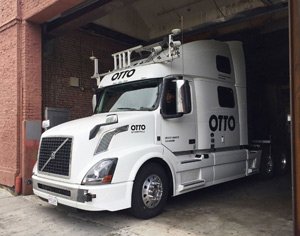 The success of this test prompted Daniel Murray, vice president of research at the American Transportation Research Institute (ATRI), to declare: "On Oct. 19, I was one of the biggest detractors of this technology; [on Oct. 20] I drank the Kool-Aid," according to Trucks.com.

Murray went on to explain that, thanks to Otto's successful self-driving truck test, he'd moved his "personal [autonomous truck takeover] timeline" from "15 to 20 years up to five."

The Tech Industry's Next Great Battleground

And the sector is, simply put, on the verge of a profit explosion.

The catalysts for this explosion will be what Keith considers "make-or-break" moments for emerging innovation companies. These moments involve "the precise instant in time when [a company] will either become a hero or a zero," he says.

For example, the success of Otto's big rig test last October was the company's "make" moment.

On Feb. 1, Business Insider reported that Lily put the cart before the horse, advertising a product that never really existed. After a year of pushing back the release date, the company closed its doors in January for good. And doing so forced the company to refund $34 million dollars' worth of pre-ordered drones. Ouch.

Profiting from the robotics trend means knowing which way the chips will fall - whether a company will have a "make" moment or a "break" one. That's where Keith comes in.

He has put together a well-researched positioning plan for investors to follow so that they can cash in on the "robot gold rush" too. Have a look...

The caveat to this story is that:
1) our ATRI research shows that "self-driving" trucks can draw more people to the trucking industry — not replace them, and 2) the OTTO truck was not "driver-less"; the driver was seated in back.

Technology enables, it does not replace…
– Dan Murray, ATRI