Gold prices are modestly weaker again in pre-U.S. trading Wednesday, amid a lack of fresh, bullish fundamental news to support the safe-haven metal.

In overnight news, Moody's credit rating service lowered its sovereign credit rating for China for the first time in about 30 years, citing China's rising debt and slowing rate of economic growth. China's stock market saw selling pressure on the Moody's news. Other markets worldwide did not show significant reactions to the surprise move by Moody's.

In focus Wednesday is the Federal Reserve's FOMC minutes from the early-May meeting, which will be released early in the afternoon. Traders and investors will closely examine the minutes for clues on the timing of the next monetary policy move by the U.S. central bank. More slight interest rate increases are expected from the Fed this year. The Fed made its last interest rate increase in March.

The key outside markets on Wednesday morning find the U.S. dollar index near steady. The greenback bulls are trying to stabilize the index after it hit a six-month low Monday. The dollar index bears remain in firm near-term technical control. Meantime, Nymex crude oil futures prices are also near steady. Crude oil prices have trended solidly higher recently, to suggest sideways, or sideways-to-higher, price action in the near term. Thursday's OPEC meeting is expected to see the cartel continue its lower production quotas that were implemented last fall. 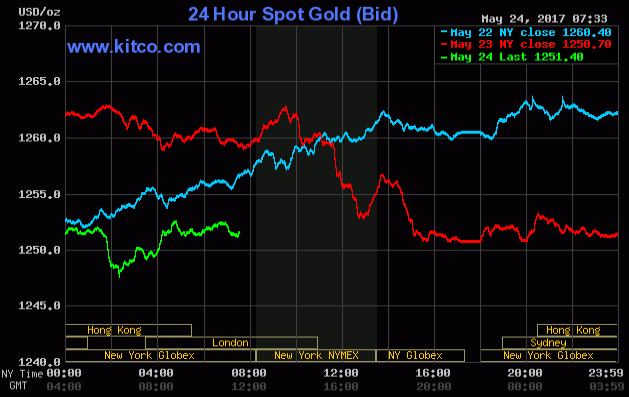