According to the IMF, the current Greek debt payment schedule is not sustainable, putting the release of bailout funds on hold. While this may seem like a warning sign for investors, it has actually created a market-beating investment opportunity in the process.

The bailout funds in question are the last installment of the third bailout program started in 2015. The current bailout program goes through the summer of 2018. At the end of the program, EU officials will evaluate Greece's situation and make a determination about debt relief. 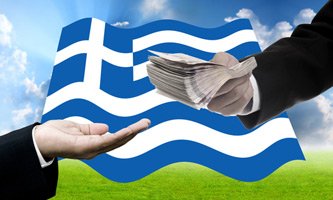 However, the IMF wants to have specific measures laid out before they approve the bailout funds. This deviates from the original agreement in 2015 and is holding up the funds that Greece desperately needs to make its July debt payments.

This delay in bailout funds is putting Greece's ability to pay its debt in jeopardy. At the same time, this dilemma is presenting us a huge profit opportunity thanks to default concerns in the Eurozone...

What Is the Greek Debt Payment Schedule?

In addition to the Treasury bills, the country owes a payment of nearly €2.1 billion ($2.4 billion) on July 17 for private investor bonds and over €290 million ($326 million) on the second IMF bailout loan. 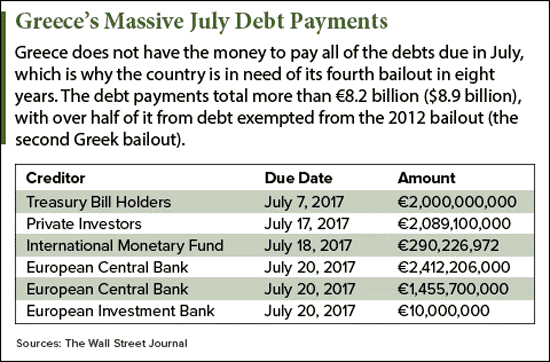 In short, Greece desperately needs the €7.6 billion ($8.5 billion) in bailout funds. Without them, the country will be unable to pay its debts in July, possibly causing it to crash out of the euro.

The next chance Greece has to secure bailout funds is June 15. Until then, investors will be watching to see if the country continues to service its debt. This uncertainty will cause the euro to drop, offering us a profit play in the process...

Playing the Euro to Profit from Greek Uncertainty