While most retail stores are shuttering their doors, Amazon.com Inc. (Nasdaq: AMZN) is opening them up.

Yesterday (May 25), Amazon opened its seventh brick-and-mortar bookstore, this one in a luxury shopping complex on New York City's Columbus Circle.

The NYC shop is the first of three planned for the New York area before the end of summer. According to Amazon's website, six more stores across the country are scheduled to open this year, bringing the grand total to 13.

You see, Amazon is completely changing the business model of traditional retail by offering consumers a "brand extension" in the form of brick-and-mortar locations.

The goal isn't profits, but keeping people engaged in the brand when they're not at home.

It's a complete 180 from traditional business models... and it's pure genius.

Anything Retail Can Do, Amazon Can Do Better

There's no doubt that Amazon is the champion of e-commerce.

In fact, as of January 2017, Amazon is the most popular online store in the United States, according to Statista.

And now, Amazon is using data it's collected over the past 22 years about customer preferences - what they like, what they buy, and what they want - to build a better bookstore.

"We have 20 years of information about books and ratings, and we have millions of customers who are passionate," said Jennifer Cast, vice president of Amazon Books, to USA Today on May 24. "It reflects how people are reading, what they're reading, why they're reading."

The most ingenious thing that Amazon is doing with the bookstore is training people to use the Amazon app.

You see, every book on Amazon's shelves will have at least a four-star rating on the Amazon website, with the exception of certain best sellers and new releases.

The bookstores will also feature a "Page Turners" section based on books that Kindle readers have read in three days or less.

Amazon isn't building brick-and-mortar stores to boost membership or improve distribution - it built it to train you, the consumer, to check with Amazon before you buy anything. The company is creating an army of Amazon-only consumers, and retail will never be the same.

You see, unlike traditional retail, which is designed to make a profit, Amazon's bookstores are not - at least not in the way you're used to.

Muse See: The Best Stocks to Buy (and When to Sell) for Mega-Profits in 2017

Instead, Amazon is using the space as an extension of its brand. For example, Amazon Kindle e-readers are placed on the shelves alongside the traditional paperbacks and hardcovers as a way to showcase Amazon's digital alternatives. Fire TV sticks, tablets, and Amazon's latest products, like the Echo and its smart assistant Alexa, are also prominently displayed throughout the stores.

However, the most ingenious thing that Amazon is doing with the bookstore is training people to use the Amazon app.

You see, unlike traditional bookstores, cash cannot be used at Amazon's stores. Customers are encouraged to make purchases through the Amazon app, which links up with an Amazon account. If you're an Amazon Prime member, you receive the same discounted pricing that you would see if you're shopping online. Otherwise, you pay the regular retail price of the book.

This not only pushes people to become Prime members (which costs $99 per year), but also trains them to use the app in other shopping scenarios - even when shopping in other bookstores.

In fact, Amazon's app has a camera feature that allows app users to take pictures of books (and virtually anything else) at a non-Amazon store and compare prices on Amazon's website.

The Future of Retail

You see, Amazon was able to thrive solely online because there were other brick-and-mortar retailers that unwittingly acted as a showroom for Amazon customers. For example, customers could go to a big-box retailer and look at a TV, make the decision to purchase it, and eventually go to Amazon and make the transaction there.

So Amazon has designed a store where that's the whole point.

With the onset of the Retail Ice Age, Amazon has taken it upon itself to nurture the void between the shopping experience and the actual purchase - on its own terms.

But don't expect Amazon to limit its physical presence to bookstores. We've already seen it expand into convenience grocery stores with Amazon Go in December 2016, and now Amazon is even rumored to be experimenting with pharmaceutical sales. 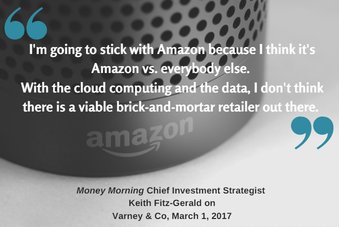 “Amazon will dominate every market it enters – a disruptive company like Amazon can turn an industry on its side,” said Money Morning Chief Investment Strategist Keith Fitz-Gerald, who has long been bullish on Amazon, on April 10.

This could very well be the future of retail as we know it.

"It's Amazon versus everybody else, and any retailer without an Amazon defense strategy is living on borrowed time," said Fitz-Gerald.

"[For that price] you can either buy 100 shares or a really nice house in the competitive San Francisco Bay area," said Fitz-Gerald.

Looks to me like it will put a lot of people out of work down the road.

Lets see, have we seen this movie before? Maybe their intent is to become the world's biggest coffee shop so come and browse the books while you drink their coffee. No? Maybe the novel idea is a catalogue store! Come in, see the merchandise and catalogue so you don't have to lug heavy parcels home it will be delivered to your door. Good control of inventory for sure!

OR maybe, just maybe we apply the e commerce multiples to brick and mortar sales! Very attractive idea FOR VALUATION! WEll, sounds like Amazon has a creative NEW idea!

If anyone can make this stick and excel, it is Amazon ! I look at them and where they have been and what they have weathered, accomplished, they have their ears to the ground that's for sure, and it seems to me they have done the homework. Amazon is noted for innovation, they seem to know when to roll with the curves and punches in the economy. It is quite compelling and encouraging to see a corporation that has stuck to its guns and built its own nitch. I like them I use them and I see a bright strong future for the org. It and Google have a parrallel kind of path, both are strong on innovation. I applaud Amazon. If there were a store in my city I would want to work for them. I see a glint of the future in their eyes.