The U.S. military has been working double time to upgrade its traditional-warfare weapons cache, but it has left itself open to one of North Korea's most devastating weapons.

On May 2, the U.S. military announced that its South Korea-based THAAD missile defense system was fully operational and ready to thwart any mid-range missile attacks Pyongyang may launch on U.S. allies in the East.

And just this past Tuesday (May 29), the U.S. military cheered its first successful missile defense test involving a simulated attack by an intercontinental ballistic missile (ICBM).

But these lauded advancements may be overshadowing the reality of another threat Pyongyang poses... 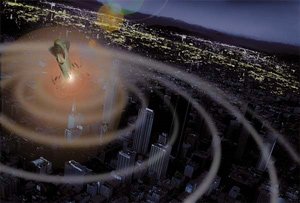 This threat is silent, invisible, and potentially more menacing than nuclear bombs. Money Morning Executive Editor Bill Patalon says its aftermath could "alter the American way of life - without the accompanying 'on switch' to put things right again."

Here's what you need to know about this "silent weapon of mass destruction" and how it's largely being ignored by politicians and analysts - to the American public's detriment.

We're Not Prepared for EMP Attacks

First, it's important to know that we're exposed to different types of EMPs every day - from power line surges, electric motors, and continual switching actions of electronic circuitry.

But EMP attacks would instantaneously expose us to electromagnetic pulses hundreds of thousands of times stronger than those emitted by everyday electronic devices.

Specifically, an EMP attack surge would short electrical devices for hundreds of miles around us. It wouldn't just disable our cell phones - our industrial computer servers, transformers, and city/regional circuit breaker panels would be rendered useless as well. Rolling blackouts would ensue, encompassing entire multistate regions of the United States.

Urgent: This small $6 U.S. defense firm with a new top-secret technology could help the Pentagon stop a Chinese sneak attack dead in its tracks. Read more...

"Think about these horrors," Bill says. "Any passenger jet flying within range would crash, killing everyone on board; anyone on ventilators or other forms of life support would die, because even the backup system would fry; cities would gridlock from all the traffic control systems crashing. It would be like the Great Northeast Blackout - on steroids."

Indeed, such an attack would be extremely chaotic to the United States - a nation almost wholly dependent upon electricity.

Not to mention that we have done nothing to shield our electrical grid from a North Korean EMP attack.

"Our devices - all of our electrical devices - aren't shielded from this kind of attack," Bill says.

And to this point, former Speaker of the House Newt Gingrich admitted as much in a FOX News op-ed just this morning: "[The U.S. electrical] grid is ill-prepared to handle [an EMP attack]," he wrote.

Gingrich went on to talk about how he had taken his North Korea EMP attack warning to Congress about a month ago on May 4. He told members of the U.S. Senate that the government needs to do something about its electrical vulnerabilities - now.

For example, Uncle Sam could take advantage of an invention two University of Nebraska engineers revealed last November: a cost-effective concrete mix that acts as a shield against intense pulses of electromagnetic energy. If coated on the outside of large buildings, all electrical devices within would be protected from a large-scale EMP emission.

Gingrich also wrote that he'd told the Senate to "cut red tape" to allow such kinds of engineer-based innovations to be used.

But Gingrich was largely ignored by his peers, which could explain why he used a FOX News op-ed as the medium to share his message today.

In fact, if EMP attack warnings like Gingrich's aren't being ignored by politicians and experts, then they're being outright denied...

EMP Attacks Come in Many "Shapes and Sizes"

For example, Jack Liu and Jeffrey Lewis, both Asia-specific nuclear non-proliferation analysts, wrote off the possibility of a North Korean EMP attack on May 10. They told VICE News that it was "unlikely science fiction" because the 10- to 20-kiloton nuclear weapons currently possessed by Pyongyang aren't capable of producing an effective EMP pulse.

But just this morning, Dr. William R. Graham, former science advisor to President Ronald Reagan, told 38 North readers that Liu and Lewis' dismissals were irresponsible. He argued that they had failed to provide thorough, concrete analysis of the two main forms atmospheric EMP attacks can take.

To add to the atmospheric forms, Bill says that EMP attacks can also take place on land in the form of surface EMP attacks...

"An EMP weapon could be trucked in, brought into a harbor by boat or sub, or flown in," he explains.

Surface EMPs are ground-based bursts of electromagnetic waves inflicted to render a specific area powerless. Their damage ranges are considerably smaller than atmospheric EMP attacks, but their delivery weapons are easier to conceal.

Whichever form a North Korean EMP attack takes, the damage inflicted will largely reflect upon the nation's preparation ahead of time (or lack thereof).

And Bill says it's best not to wait for Uncle Sam to make that first move...

As an expert of the "Asian Arms Race" and an analyst who's been eyeing North Korea's nontraditional weapons advancements for several years, Bill knows that it would be tough to consider your finances amid the devastating aftermath of a WMD attack. And he understands that some members of the public don't necessarily see a point in securing their financial futures when "planes are falling out of the sky."

But in the wake of any attack - or of any widespread disaster, for that matter -- fiscal security provides a much-appreciated added layer of protection.

So Bill still says investors ought to keep their future selves in mind...

He recommends Lockheed Martin Corp. (NYSE: LMT), for example. On Tuesday, March 29, missile defense experts at Lockheed were officially tasked with building between 18 and 40 missile rocket interceptors to protect against incoming ballistic missile threats. That contract was worth $273.5 million.

And since Bill first recommended Lockheed in March 2016, its share price has gone up 26%.

Take a look at more of Bill's recommendations, complete with his astute North Korea analyses, in his subscription service Private Briefing. You can find it here...

I'm not sure it's wise to suggest how our enemies could seriously harm our country and kill a lot of our people. Do you have more suggestions of how to hurt and kill us?

The effects of an EMP device would be transitory, not permanently fatal. It would blow circuit breakers, cause electronic devices to reset, and interrupt communications temporarily, but only cause lasting damage to some devices, depending how their circuits are designed. Two nuclear bombs set off 150 miles above the earth aren't going to cause much damage on the surface, unless you happen to be outside sunbathing that day. Who launched those satelites for N.Korea? They don't have the rocket power to do it themselves. If the Chinese or Russia did, I doubt seriously that they would launch a nuclear device carrying satelite for someone as flaky as the N. Koreans. The N.Koreans should be told that any pre-emptory strike on their part would result in their total nuclear annihilation and we strongly suggest that they find more constructive ways to use their resources than building war machines.