Gold prices are lower in pre-U.S. session trading, amid the "risk-on" appetite seen in the world marketplace so far Friday.

A feature in the marketplace so far today is solidly lower crude oil prices. Nymex crude oil futures prices hit a three-week low overnight, below $47.00 a barrel. The weekly DOE liquid energy stocks report released on Thursday was bearish, showing rising U.S. crude oil exports. A Wall Street Journal survey of oil analysts showed them lowering their oil price expectations in the near term and in the longer term. The oil market bears have gained downside momentum this week and have the firm overall near-term technical advantage.

Traders and investors are looking forward to Friday morning's U.S. employment report for May from the Labor Department. The key non-farm payrolls number was forecast earlier this week to come in at up around 210,000. However, the ADP jobs report for May, released Thursday, showed a reading of up 253,000. A rise of around 180,000 jobs was expected for the ADP report. The stronger ADP number on Thursday now has many thinking Friday's more important U.S. non-farm jobs number could be a miss to the upside, too. A strong U.S. jobs report Friday morning would firmly suggest the Federal Reserve will raise its key interest rate in a couple weeks.

In other overnight news, the Euro zone producer price index was reported unchanged in April from March and up 4.3%, year-on-year. The numbers were in line with market expectations.

The other "outside market" on Friday morning finds the U.S. dollar index near steady. The greenback bears are in near-term technical control as dollar index prices are in a nearly three-month-old downtrend. 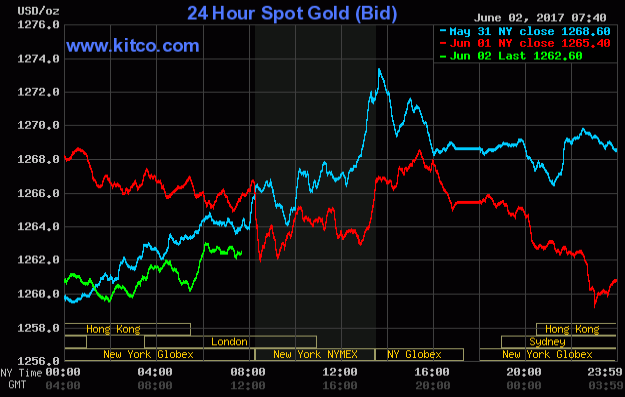 Other U.S. economic data due for release Friday includes the international trade report and the ISM New York report on business.

4728 Reads
The Two Best Penny Stocks to Buy This Week Offer 150% Upside
Here are two of the best penny stocks to buy right now, and the strategies I used to find them. This could be up to 154% potential gain for today's investor...