Indeed, as cracks continue to deepen in the decades-old friendship between Pyongyang and Beijing, Russian President Vladimir Putin has taken steps to fill in the Red Dragon's shoes.

"Russia (has) begun quietly laying the groundwork that would strengthen its ties to North Korea, thus increasing its global political leverage should it need it," analysts at political intelligence firm Stratfor explained in a May 5 report, referring to Putin's overwrought ties with the West.

And just today (June 5), statistical proof emerged that this relationship is already flourishing…

According to a USA Today report this morning, trade between Russia and North Korea increased by a staggering 73% during the first two months of this year compared to the same period last year. 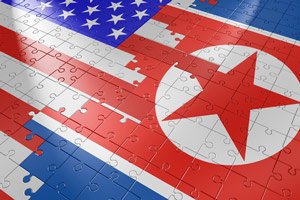 This boost sprang from an uptick in Russia-bound coal imports from Pyongyang after China issued sanctions against North Korea – first temporarily on Dec. 12, 2016, then expanded indefinitely on Feb. 19, 2017.

Specifically, Beijing's coal ban last December was meant to pressure North Korea into abandoning its nuclear weapons testing course. The outcome of these sanctions should have meant quick fiscal devastation for Pyongyang, especially since the nation's foreign currency is believed to primarily come from the millions of tons of coal it sells to China each year.

To be clear, there's been some public skepticism that China's moratorium isn't quite so serious…

Gordon Chang, author of "The Coming Collapse of China," told FOX News on June 1: "We know that the Chinese bought North Korean coal in February after the announcement [of the moratorium] in March, in April, and in May."

Furthermore, data released on April 13 from The New York Times showed that China's trade with the Hermit Dynasty actually grew 37.4% in the first quarter of this year from the same period in 2016. Chinese exports surged 54.5%, and imports increased 18.4% – again, in spite of the North Korean coal import ban.

Nonetheless, Beijing's coal ban – however nominal – did damage the relationship between itself and Pyongyang. Now, Russia has stepped in to fulfill China's role, "ordering $22 million worth of coal, lignite with a value of around $4.7 million, and oil estimated at $1.2 million," reported Deutsche Welle on May 15, 2017.

Now, those aren't huge amounts, especially considering China's pre-moratorium consumption of North Korean coal amounted to about $6 billion annually. But it's enough to stoke the flames of this dangerous relationship.

On May 8, a new ferry service between Rajin (a North Korea border town) and Vladivostok (a Russian border town) commenced its maiden voyage. Now, it's expected to regularly transport 200 passengers and 1,000 tons of cargo six times a month.

This ferry route serves to further boost North Korea's economy amid international sanctions because it will likely bring Russian entrepreneurs and investors into the North. 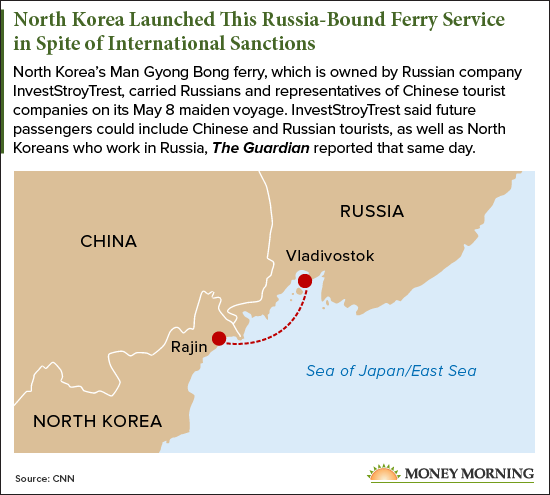 And on top of the travel and trade assistance North Korea's been getting, Moscow reached a labor immigration agreement with Pyongyang on March 21. The deal expands the shipment of North Korean workers to Russia.

This program – rife with allegations of abuse and exploitation – already had 40,000 North Korean laborers in Russia's timber and construction industries before the May 21 agreement.

The expansion will add some 10,000 more workers to that sum, reported Vox on May 22.

Russia's support of North Korea flies in the face of what the majority of world leaders want right now: for Pyongyang's finances to be so cut off that it can't possibly continue with its increasingly aggressive weapons testing.

In fact, according to Money Morning's expert on the matter, Russia's recent behavior isn't at all uncharacteristic of the country. And world leaders should have seen it coming…

Russia: The Constantly Scheming "Friend" of the East

"Russia is the devil's advocate," says Money Morning Executive Editor Bill Patalon, who's been researching and reporting on Moscow's conniving maneuvers in the "Asian Arms Race" since 2013.

"The country is arming and funding the entire East," Bill adds.

Indeed, while Russia's subsidization moves of late point toward a particular affection for Pyongyang, Bill explained in depth last year that Moscow had been – and still is – supplying the entire East with weapons for quite some time now.

The GMD success in particular will lead to a continued rollout now of new, identical systems nationwide.

"Currently, there are 36 GMD interceptors apportioned between the military sites in Alaska and California," Bill told his Private Briefing subscribers on May 31. "A total of 44 interceptors are supposed to be fielded by year-end – with the program being ramped up because of the quickly growing North Korea threat."

What better way, Bill surmised, to make surefire profits amid the turmoil than to literally invest in our nation's safety? You see, by keeping an eye on which companies Uncle Sam is contracting to develop these defense systems – and which of these systems are actually working – you can stand to make serious profits. Indeed, one of Bill's main recommendations is Boeing Co. (NYSE: BA) – a firm directly involved in both the GMD and THAAD's production.

And since Bill's initial September 2011 recommendation of Boeing, it's gained 202%.