Last week's performance continues the strong 9.4% rebound that's been nearly non-stop higher since bottoming at $16.07 on May 9.

The silver price is now at a level where it could run into overhead resistance. Despite that, its price action is still looking promising for bulls.

Meanwhile, technical indicators continue moving in the right direction, favoring higher silver prices. And on the fundamental side, silver drivers equally point to positive conditions for the metal.

I'm going to show you how three of these factors support my bullish silver price target in 2017. First, let's look at silver's continued rebound last week...

Tuesday offered a mixed performance for the price of silver. It sold off early in the morning, falling as low as $17.23, before surging higher in the afternoon. By the end of the session, the silver price closed at $17.38 for a small 0.1% gain.

After retreating overnight, silver saw renewed - though subtle - strength Wednesday morning. However, prices traded below the previous day's close and ended at $17.30 for a 0.5% loss. This came despite a gradual decline in the U.S. dollar. 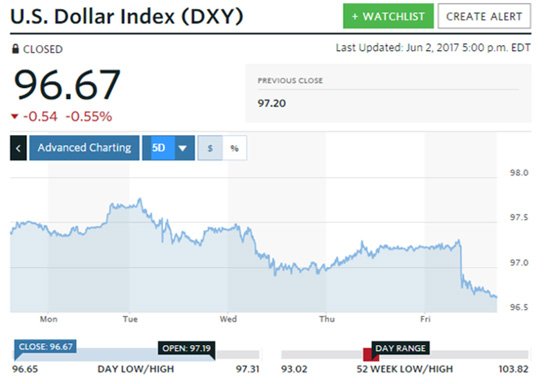 On Thursday, June 1, the DXY regained its previous losses and moved from 97 to 97.25. This weighed on silver prices, which once again sold off in the early morning, opening at $17.10. Despite heading higher in the afternoon, silver still closed the session at $17.27 for a 0.2% loss.

It wasn't until Friday that silver saw a tremendous rally. It opened sharply higher at $17.35 thanks to huge dollar sell-off after a weak May jobs report. From there, the price of silver kept gaining momentum and eventually closed the day 1.5% higher at $17.53 - the highest level since April 25. With that, silver posted a weekly gain of 1.2%.

The silver price today (Monday, June 5) is also continuing higher, putting the metal on track for another record close. It's up 0.3% and trading at $17.58.

If we look at silver's technical and fundamental indicators like the gold/silver ratio, we can see the metal has a lot more room to run higher this year. That's why I want to show you just how high I see silver heading by the end of December 2017.

Price of Silver in 2017 Will Hit This Bullish Target

What a bunch of self serving bull. Silver has remained in a very narrow price range for years. No sign of it moving up in an explosive manner. These recommendations are hype. Will be glad to eat my words if silver even goes to $25/oz. Think I will be hungry for a long time.