(Kitco News) - World stock markets were mostly lower Monday, on corrective pullbacks from recent gains that have put many stock indexes at or near record or multi-year highs. U.S. stock indexes are pointed toward slightly lower openings when the New York day session begins.

Gold prices are modestly higher to start the trading week. There are some new geopolitical tensions in the Middle East that are prompting just a bit of risk aversion that is supporting the safe-haven metal. Saudi Arabia and a few other Middle East nations have cut ties with Qatar after accusing that small country of promoting terrorism.

Another terror attack that killed seven people in London over the weekend had little impact on the world markets. Unfortunately, these acts have become a fact of life in recent years and markets tend to quickly look past them.

In overnight news, the Eurozone composite purchasing managers index (PMI) came in at 56.8 in May, which was the same reading as April and was in line with market expectations.

Nymex crude oil futures prices are slightly lower in early U.S. trading. The oil market bears have the firm overall near-term technical advantage. The other "outside market" on Monday morning finds the U.S. dollar index firmer on a short-covering bounce after hitting a six-month low late last week. The greenback bears are also in firm near-term technical control as dollar index prices are in a three-month-old downtrend.

Traders and investors are starting to look over the horizon, as key marketplace developments in the coming days include general elections in the U.K. later this week and the FOMC meeting next week. 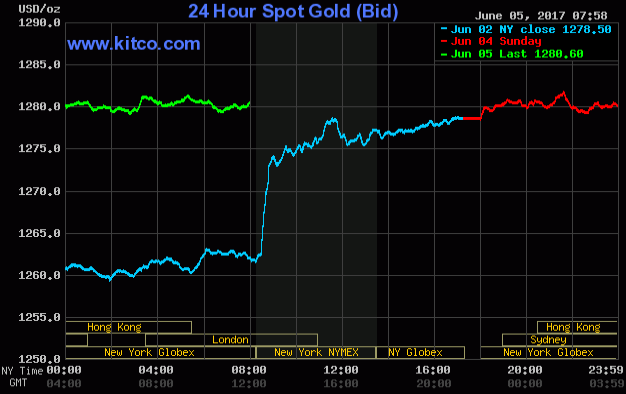