Specialty children's clothing company Gymboree is nearing a deadline on its $1.1 billion debt load, and the retailer is expected to file for bankruptcy as early as this week. 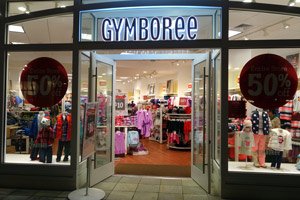 You see, Gymboree missed a multimillion-dollar payment due on June 1 and still has many hundreds of millions in principal due next year. Now the company has few options left but to restructure its debt and operations and file for Chapter 11 protection to keep afloat.

"Gymboree lost its way when they started to be everything for everybody," said Joan Barnes, the founder of the company, to The San Francisco Business Times in May. "Rather than stay true to who we were, we started art classes and sports and went into department stores... Eventually a company can either spin that growth well or end up diluting the brand."

Similar to the rest of the retail industry, the company said in its most recent earnings release it "started experiencing more difficult traffic and conversion trends."

But Gymboree's fate could be much worse than just filing for bankruptcy...

The struggling children's specialty retailer is more likely to liquidate entirely and be eaten up by competitors if it can't score a lifeline on its debt load. Here's why that could happen, and more importantly, how you can benefit...

For Retailers like Gymboree, Bankruptcy Is a Best-Case Scenario

A common trend has developed in recent years: Retailers file for bankruptcy with the intention of reorganizing but instead wind up liquidating.

Just last month, electronics retailer Gregg Appliances Inc. announced it would be permanently going out of business and shutting down all of its hhgregg stores after filing for Chapter 11 protection in early 2017.

And Gymboree may soon find itself added to that list.

You see, between the missed multimillion-dollar interest payment and the nearly $800 million loan due next year, Gymboree's lackluster earnings report could not have come at a worse time.

"Gymboree is a story of leverage and sluggish earnings," said Reshmi Basu, editor at Debtwire, to Retail Dive on May 30. "It's just too much leverage. It's a liquidity issue at this point as well."

You see, even if Gymboree files for bankruptcy protection as expected, the company could still find itself permanently shuttering its doors. Fitch Ratings analysts found that out of 30 retail bankruptcies over the past decade, half ended in liquidation, compared to 17% across other industries.

The retail industry has the Internet to thank for that huge gap, which has taken a massive toll on retail stores over the past ten years.

"With the growth of online shopping and increasing online apparel sales starting to explode, it's no wonder America's brick-and-mortar apparel retailers are closing stores across the country!" said Money Morning Capital Wave Strategist - and retail sector expert - Shah Gilani to readers on April 28.

In fact, in-store sales at the nation's department stores averaged $165 per square foot in 2006, according to Green Street Advisors, a premier real estate research firm. As of spring 2016, that number was down 24% to $124... and it's been falling steadily since then.

"The ease of Internet shopping, the cheaper prices, the ability to comparison shop, and the free shipping has made heading to your favorite mall or retail shopping center look like a waste of time and money," said Shah.

And let's not forget about the absolute behemoth that is Amazon.com Inc. (Nasdaq: AMZN). As of last month, Amazon accounts for over 43% of all online retail sales in the United States, according to Slice Intelligence.

In the ever-shrinking retail space, a Gymboree liquidation could present a huge opportunity for other children's apparel retailers to scoop up lost sales.

In fact, Children's Place Inc. (Nasdaq: PLCE) has already started to sniff around the dying company...

"With 800 stores that executives of The Children's Place have identified as overlapping with Gymboree stores, the company is perhaps best positioned to capture Gymboree's market share should it shutter hundreds of stores," reported Retail Dive on May 30.

These 3 Companies Will Be the Next to Fail in 2017

"There is a lot of market share coming up for grabs when Gymboree closes these stores," Susan Anderson, analyst and senior vice president at FBR & Co., said to Retail Dive. "I think [The Children's Place] will probably see the benefit.... Obviously, Gymboree shutting down stores is going to help everyone else."

But that success will be short-lived. Traditional retail as a whole is falling victim to the "Retail Ice Age," and specialty shops like children's clothing stores are no exception.

But quite a few traders have been making their profits from the death of retail stores - and so could you...

How You Can Profit from the Death of Retail

Almost every traditional brick-and-mortar retailer has seen its stock get cut to pieces as the "Retail Ice Age" continues to shatter the industry.

And retail investors have been devastated as these companies - and their stock prices - continue to fall.

Fortunately, Shah has been helping our readers collect gains all the way down.

Sure enough, three days later, Kohl's stock was sitting at a new low of $37.14. Through options trading, Shah - and his readers - were able to profit from the slump.

And you could have, too - but it's not too late.

In fact, "If these trends continue, and researchers expect them to, Wall Street analysts say we could see 50 retail bankruptcies in the next 12 to 24 months," according to Shah.

It may be the end for Gymboree, but we're just getting started...

Editor's Note: Doomed-to-fail companies could be your entry ticket to millions. In fact, targeting the worst stocks in America is the BEST way to get rich - if you know how to do it. We've created The Bankruptcy Almanac that pinpoints more than 40 companies and could help you make $1.6 million or more. Don't wait - get your copy now...