In fact, the pace of ICOs grew last year from a few per month to 13 per month by December.

ICOs are built on the same blockchain technology that powers Bitcoin. But these tokens, or "coins," are custom cryptocurrencies offered by startups to raise capital for their business.

Within a week the Gnosis token had tripled in value, from $30 to $90, giving the company a $1 billion valuation. Gnosis is a startup that wants to use blockchain technology to build a prediction market business. 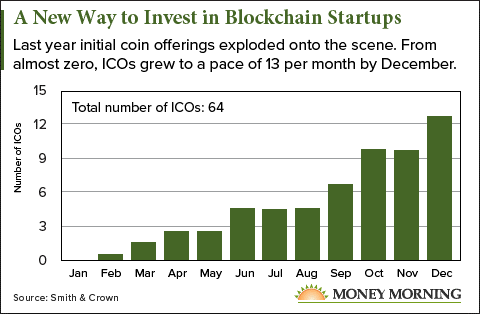 More importantly, investor appetite for ICOs is beyond ravenous. On May 31, the web browser Brave conducted an ICO of its "Basic Attention Tokens." In less than 30 seconds, it raised $35 million, selling out.

"We're in a very frothy phase of ICOs," Naval Ravikant, a venture partner at digital currency firm MetaStable Capital, told CNBC. "People are getting caught up in the vision and it's going to take 10 to 20 years to build out. In the meantime, people are throwing money at anything that looks like it has a shot."

But while ICOs are an intriguing innovation that shows promise, the utter lack of regulation of this new investment tool means it's fraught with risk.

Let's take a closer look at this phenomenon...

What Is an ICO?

ICOs are a form of crowdfunding that uses digital currencies as the investing mechanism. Ideally the coin, referred to as a "token," is an integral part of the startup's business.

In the case of the Brave browser ICO, advertisers pay in BAT tokens. The website publishers receive most of the BAT tokens. But Brave users that opt in to the system also receive BAT tokens based on how many ads they view and for how long.

The idea is to improve the user experience with fewer annoying, bandwidth-wasting ads by offering them with a reward. Advertisers get what they want most - user attention - and publishers should earn more than they do now. Publishers might also let people pay in tokens to access premium content.

So the Brave tokens have value based on their utility within this system. They're also linked to Ethereum, the No. 2 cryptocurrency behind Bitcoin. Investors had to use Ethereum to buy the BAT tokens in the ICO.

That's also typical of ICOs. Most require investors to use either Bitcoin or Ethereum (one reason both cryptocurrencies have skyrocketed this year).

A cap is also common among ICOs. The Brave ICO was capped at 1 billion tokens. The startup usually has a target sum it's trying to reach and uses a cap to prevent the ICO from getting out of control.

Once the ICO is over, the new tokens trade on one of the many cryptocurrency exchanges, both for fiat currencies and other cryptocurrencies like Bitcoin and Ethereum. If the startup thrives and use of the token increases, its value will increase.

Investors have embraced ICOs because many see them as a way to get in early on a promising startup. As more startups wait longer to have an initial public offering, much of the value is already priced in at the IPO launch, leaving retail investors with much less upside than they had 15 years ago.

Plus, the huge gains for Bitcoin (up 81,667% since the fall of 2011) and Ethereum (up 2,737% in 2017 alone) have created something of a gold rush into cryptocurrencies, with ICOs presenting the most potential upside.

It sounds great. Invest in an ICO today, become a millionaire tomorrow.

But despite the potential, investing in ICOs has a lot of pitfalls. Here's why you need to be extremely wary of this trend...

What If ICOs Are Illegal?