While the United States, South Korea, and Japan suspected the North had anti-ship missiles, they were believed to only have "obsolete models descended from the Soviet 1960s-era Styx missile," reported Popular Mechanics on April 24.

"These missiles are old and vulnerable to modern electronic countermeasures and air defenses," PM wrote. "They also have a fairly short range -- shorter than the aircraft on the carrier itself. So it would be easy for a ship like the [U.S.S. Carl] Vinson to sit off the coastline and safely launch airstrikes."

That two-month-old assessment, however, is now obsolete.

You see, yesterday's SCUD launch consisted of short-range missiles that flew about 450 kilometers (280 miles) into the sea off of Japan's coast. They were projectiles with precision control guidance systems. 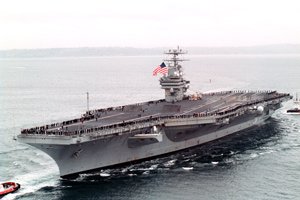 The U.S.S. Carl Vinson returns home after completing a six-month deployment on Jan. 23, 2002.

Yang Uk, a senior researcher at the Korea Defense and Security Forum, a research institute in Seoul, told The New York Times yesterday that Pyongyang's latest missile launch was meant to demonstrate its ability to repel strikes on the Korean Peninsula - such as a preemptive attack launched by the United States.

"If the U.S. were to preemptively strike North Korea, it would use aircraft and vessels," said Uk. "And in these last series of tests, North Korea is showing they can deter those strikes."

Those preemptive strikes, if they were to occur, would come directly from the U.S.S. Carl Vinson brigade - which left the peninsula's waters on May 31.

And the fact that North Korea waited to exert its weapons cache until the armada was gone may have been a worrisome strategic move in and of itself...

"The timing was interesting because these U.S. ships and Japanese ships have left," said Narushige Michishita, director of the Security and International Studies Program at the National Graduate Institute for Policy Studies in Tokyo, according NYT yesterday. "In a way, it wasn't too provocative."

As in, "not provocative enough" to provoke an attack by, say, the Carl Vinson - had it been present.

Michishita added that waiting was an indication that North Korea is following a specific strategic program.

That "strategic program," he said, was borne of Pyongyang's intent to show off its "ability not only to reach targets further away but also to prevent strikes against [itself]."

In other words, both North Korea's weapons and its tests are designed to avoid foreign attack just as much as they are to destroy their enemies.

Michishita added that North Korea has "a pretty well-thought-out strategy that they have been developing. They are not stupid. You cannot underestimate them."

In fact, Bill has been saying the same thing... for years...

As Tensions Mount, U.S. Companies Are Developing Our Defenses

Since 2013, Bill has been warning his Private Briefing readers that the United States has generally underestimated the threat from North Korea's nuclear and ballistic missile programs.

And he's made prescient calls on three stocks that have been consistent performers so far, but that should soar even higher once reality "catches up" with American policymakers.

New glide weapons - most often, bombs that "glide" to targets without the need for delivery jets nearby - are being designed on U.S. soil right now, which will spur the need for hypersonic-powered interceptors.

And that will stoke the need for hypersonic motors - one of Orbital's specialties.

The Pentagon will do everything in its power to stay ahead of Pyongyang - and we'll be riding the profits all the way up.

Click here to learn more about Bill's "Asian arms race" picks and to get his lucrative Private Briefing recommendations every day.