The crisis in Qatar that played out before the world's eyes on Monday (June 5) was provoked by a billion-dollar ransom payment Doha made earlier this year.

Specifically, the now-ousted little brother in the Middle East paid off two of the most divisive entities in the region this past April: Iran and an al-Qaeda affiliate.

While nations in the OPEC territory have long criticized Qatar for actively supporting Islamic terrorists, Doha's ransom payment to both Shiite Iran and al-Qaeda extremists was "the straw that broke the camel's back." 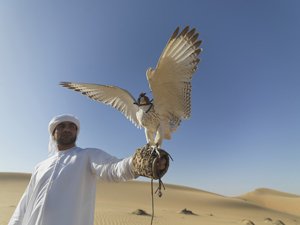 In December 2015, 26 members of the Qatari royal family's falconry party were kidnapped by Shiite militants closely allied with Iran and members of the al-Qaeda-affiliated group Tahrir al-Sham.

The hunting party, which had crossed into Southern Iraq legally, was nabbed in the mountains while on a hunt with falcons, reported The Financial Times on June 5.

It wasn't until this past April that these 26 hostages resurfaced in Doha again. News immediately spread locally that Qatar had paid $930 million to the kidnappers and $400 million to the al-Qaeda fighters for their release, FT also stated.

The news of the Qatari ransom spread globally only after Saudi Arabia, Egypt, the United Arab Emirates, Bahrain, Yemen, and a powerful military leader in Libya all severed ties with Qatar on Monday.

The rift sparked international concern over the future well-being of OPEC, of which Qatar still is an active member alongside many of the Middle Eastern nations that have shunned it.

This kidnapping, however, isn't a detriment to OPEC so much as more proof of its resilience. You see, kidnappings between OPEC members are not uncommon incidents.

For example, Iran's militias have a long history of kidnapping in Iraq, especially of Americans after the 2003 invasion. The kidnapping of the falconry party in December 2015 came around the same time as two other abductions involving citizens of Turkey and the United States.

"While this latest spat between OPEC member countries has the potential to give short-term oil prices a hit, it won't fundamentally reshape the oil market," Moors wrote, adding that, no matter what, "the OPEC agreement will work to push oil prices higher this year."

But Moors, who's a 35-year expert in global oil and gas policy, remains steadfast in his 2017 oil price forecasts...

Moors' confidence in his prediction, which he first noted on May 22, stems from the fact that no matter what kind of internal cartel feuds arise, the oil cartel has a common goal to keep oil prices high...

But just in case oil investors are still skeptical of OPEC's production deal in light of recent in-house feuding, Moors has another profit play as well...

Magellan Midstream Partners LP (NYSE: MMP) is a master limited partnership (MLP) - a company that makes 90% of its total revenue from oil or other natural resources and that usually operates in the midstream sector. In other words, it stores and transports oil instead of producing (upstream) or selling (downstream).

That's BS. 1 billion will not make any dent in Qatar or SA economy. It's worth one day of current crisis. The rift is about gas, LNG to be exact. Iran and Qatar have the largest joint natural gas project in the world. Russia is third. So if all three get together it mans dooms day for Saudis and UAE, especially UAE. Now add Syria, Iraq and Afganistán and Turkey with their potentials for gas pipelines to the East and to the West. Then you realize what's really is going on in the region!