Oil prices are down 14% on the year, despite OPEC starting and extending its 1.8-million-barrel oil production cut agreement in 2017. But we think oil prices will rally in Q3, and we're going to show you our bullish oil price forecast for the next quarter…

The WTI crude oil price has dropped to $45.99 per barrel today (Tuesday, June 13), down from $53.72 at the very end of 2016. The oil price drop surprised investors because OPEC reached a deal to cut oil production on Nov. 30, 2016. The production cut was designed to limit global supply and boost oil prices. 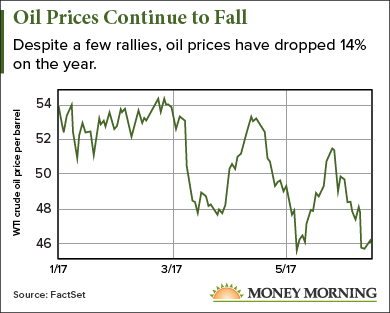 Between Nov. 30 and the end of the year, WTI oil prices rallied 21% from $44.48 per barrel to $53.72, as oil traders believed OPEC would be successful in managing oil prices. But ever since the agreement went into effect on Jan. 1, 2017, oil prices have been volatile.

Unlike OPEC members, the U.S. government doesn't manage the country's oil production. American oil companies are free to produce as much or as little oil as they want.

And when oil prices rise, they drill more oil.

More than half of the U.S.' oil reserves are in hard-to-reach shale oil, according to Rystad Energy. While shale oil is abundant in the United States – a recent discovery in the Permian Basin added 20 billion barrels of oil to the known reserves – it's unprofitable without higher oil prices. Oil prices need to be between $40 and $60 a barrel for oil companies to turn a profit, so the higher the price, the more money they can make.

When oil prices rose between $52 and $54 in early 2017, American shale producers took advantage of the higher oil prices and churned out more oil. Since the start of the year, weekly American oil production is up 6%. Oil producers added 548,000 more barrels of oil in the first week of June than in the last week of December.

On top of that, Money Morning Global Energy Strategist Dr. Kent Moors says traders are also overreacting to changes in oil's trend lines, like the 200-day moving average. Moors says hedge funds, or their computer algorithms, rely on this "imaginary line" to determine whether oil prices will rise or fall. That's part of the reason the chart above shows oil prices swinging so suddenly.

But these developments are more about traders overreacting than about market fundamentals.

Eventually, these short-term hiccups will give way to the long-term fundamentals of supply and demand. And we expect that to spur double-digit gains for the price of oil by the start of the next quarter…