In Dow Jones news today, stock prices fell as the Senate passed a bill that would place new sanctions on Russia. 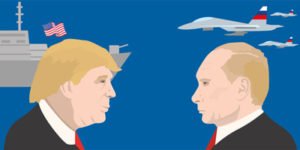