As recently as last fall, a Bitcoin price prediction of $3,000 in 2017 would have seemed absurd.

In early October, the Bitcoin price was just a bit north of $600. Earlier this week, the price of Bitcoin breached $3,000 for the first time - a gain of 500% in just nine months.

That brings us to Wences Casares, the CEO of the Bitcoin wallet startup Xapo and a member of PayPal Holdings Inc.'s (Nasdaq: PYPL) board of directors. In a May 22 speech to Coin Center, Casares repeated his Bitcoin price prediction of $1 million per Bitcoin in 10 years. 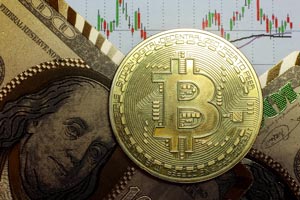 His reasoning is that Bitcoin will emerge as a "global standard of settlement" - the ultimate reserve currency.

Casares first made the prediction in 2014, when the cryptocurrency was in free fall as a result of the collapse of the Mt. Gox Bitcoin exchange.

While a Bitcoin price prediction of $1 million may seem far-fetched, predictions that Bitcoin would reach $3,000 this year would have struck most folks outside the cryptocurrency community as ridiculous.

But does that make any sense? What could possibly drive the price of Bitcoin to such astronomical levels?

Surprisingly, there are multiple scenarios in which Bitcoin could reach the $500,000 to $1 million range...

How a Lofty Bitcoin Price Prediction Could Come True

Last month Jeremy Liew, the first investor in Snapchat, and Peter Smith, the CEO and co-founder of Blockchain, developed a Bitcoin price prediction of $500,000 by 2030. They cite three catalysts in particular.

First, Smith and Liew argue that more people will use Bitcoin for remittances, the practice of foreign workers sending money to their countries of origin.

Second, they believe the atmosphere of political uncertainty in both developed nations, such as the United States, as well as developing countries, will drive more people to buy Bitcoin as a safe-haven investment like gold.

Third, Smith and Liew said the use of smartphones for transactions will open the door for Bitcoin. They estimate that Bitcoin could account for as much as half of the world's non-cash transactions by 2030.

Smith and Liew calculated that the rising usage will result in the average Bitcoin user holding $25,000 worth of the cryptocurrency by 2030. They also assume that the number of Bitcoin users will grow from 6.5 million to 400 million. 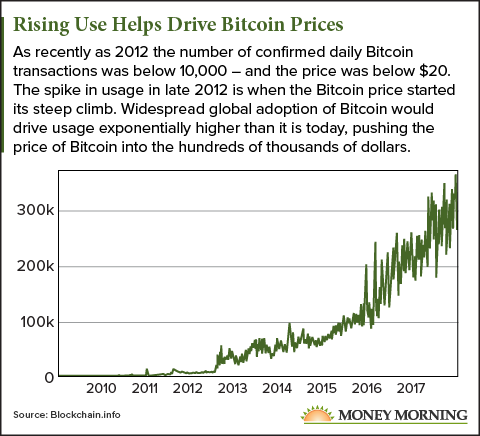 Another possibility is hyperinflation...

The U.S. Government Will Boost the Price of Bitcoin

Rapidly increasing borrowing and spending by the federal government could undermine the value of the U.S. dollar to the point that inflation spirals out of control.

This isn't as far-fetched as it may seem.

When the Social Security Trust Fund runs out in 2034, the U.S. government will either need to chop benefits by 25% or jack up payroll taxes on those still working. Politics being what it is, Washington is likely to shun both options and elect to borrow the needed trillions.

That could easily lead to hyperinflation, in which the prices of everything would skyrocket. Bitcoin would skyrocket faster as a safe haven and store of value.

The price of Bitcoin will benefit even from the tame inflation we have now. After all, the value of the U.S. dollar has declined 97% since 1913. Because Bitcoin is deflationary by definition - it has a fixed supply of coins created at a decreasing rate - it can only gain against the dollar.

But the best chance Bitcoin has of reaching $1 million over the next decade or so could result from a global decision to demote the U.S. dollar from a role it has held for nearly a century...

This Would Send the Bitcoin Price to $1 Million Territory

Can we determine which cryptocurrency will dominate or will there be more than one?

Very interesting reference points that are taken to predict the possible value of the BTC in the next 10 years. Are there economic studies that support these predictions? I would like to know if you can apply the theory of investment value of Benjamin Graham and validate if BTC is a smart and supported investment?

Tony, Tony… You are only the second person I've found who has grasped these facts. THank you!
I thought I was alone and thus ipso facto it is I who is insane…..

You can download the bitcoin open source code for free on this site:
https://github.com/bitcoin/bitcoin

Run it and create as many crypto currencies as you want. Create millions of these virtual tokens for yourself for free, then sell each one for $1 million dollars each if you can find someone to buy it at that price.