When the price of Bitcoin sneezes, the cryptocurrency world catches a cold.

As the Bitcoin price had yet another volatile week, its dramatic moves dragged just about every other cryptocurrency along with it.

Those who bought Ethereum, Litecoin, Dash, and other cryptos for diversification from Bitcoin found that out this week. All of those currencies closely mirrored Bitcoin's erratic performance. 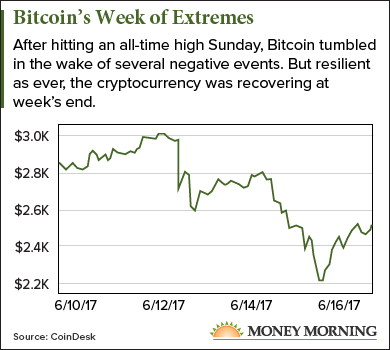 After bouncing back into the $2,800 range on Tuesday and Wednesday, the Bitcoin price fell hard on Thursday. That's when Bitcoin hit its low for the week, $2,185.96. That represented a whopping 27.75% decline in just four days.

Here's why the Bitcoin price was all over the place this week...

Why the Price of Bitcoin Was So Erratic This Week

This week's extreme volatility came at the tail end of the previous week's rally.

A lot of favorable media attention on Bitcoin's big gains in 2017 - before the pullback it was up more than 200% on the year - was driving interest, helping to pull new money into the digital currency.

The surge in new initial coin offerings (ICOs), cryptocurrency tokens sold by blockchain-based startups, has also helped drive the price of Bitcoin in recent weeks. ICOs typically don't have an option for buying with fiat currency like U.S. dollars, but instead require investors to buy tokens with major cryptocurrencies like Bitcoin and Ethereum.

But those long-term positive catalysts were quickly short-circuited by an onslaught of negative ones...

One of the first problems was a string of denial-of-service attacks on at least two Bitcoin exchanges, Bitfinex and BTC-e. Such attacks do not put customer funds at risk, but slow down or crash the websites, making Bitcoin trading difficult or impossible.

Trouble at any Bitcoin exchange can cause concern throughout the community and trigger selling - much like the stock markets.

The Goldman report suggested the Bitcoin price would "retrace" to somewhere between $1,915 and $2,330 (which it did).

Why the Bitcoin Price Tanked Thursday

"It is not clear why cryptocurrencies are appreciating so rapidly (apart from the appreciation itself drawing in more speculation against a potentially inefficient ability to sell)," Morgan Stanley said in a note.

Bitmain said that if the proposed solution known as BIP 148 goes into effect Aug. 1 as planned, it will launch its own "hard fork" of the Bitcoin software in response. That would be a potential disaster, as it would create competing versions of Bitcoin.

Bitmain's announcement was the main catalyst for Thursday's plunge. And Bitcoin's woes quickly infected other cryptocurrencies.

The No. 2 cryptocurrency, Ethereum, fell more than 23%. Most cryptocurrencies were down anywhere from 10% to 20% on Thursday.

As bad as things looked, though, by Friday a recovery for the price of Bitcoin as well as other cryptocurrencies was in full swing.

In fact, this week was a terrific example of what to do - and not to do - when investing in Bitcoin.

What This Week Can Teach You About Investing in Bitcoin